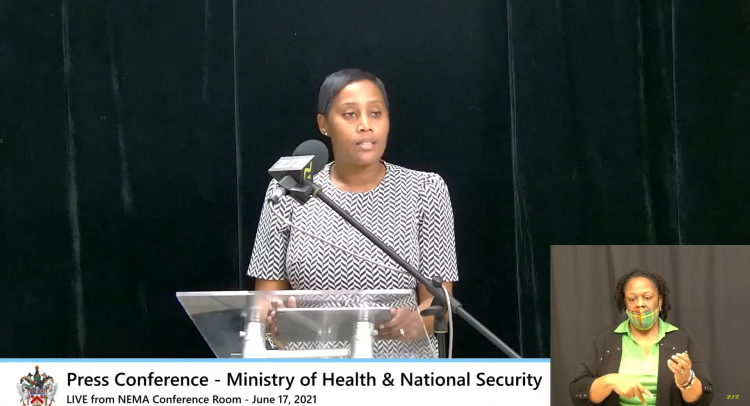 It came 15 months after the first case was confirmed in the country, on 24th  March 2020, when a 21-year-old male and a 57-year-old female returned home from the United States.

The death is a development that health officials had been warning against for many months, especially when the community spread started last month.

While announcing the death at a press conference, Minister of Health, Akilah Byron-Nisbett, immediately extended condolences to the family of the unfortunate victim.

She, however, did not disclose the name or gender of the person who died.

“We have repeatedly said that we are not immune to the ravages of COVID-19, including severe disease and death.” Said the Health Minister.

She indicated that it was only on Wednesday, 16th June, that the United States reached the milestone of 600,000 deaths.

This, implied the minister, should serve as a stimulus for people in St. Kitts & Nevis to take stock of their situation and to get vaccinated.

“The vaccine prevents us from getting seriously ill and dying from COVID-19. While we mourn the loss of our first citizen, my trust is that this would serve as a wake-up call for all,” stated Byron-Nisbett.

It is not known at this time if the deceased was vaccinated or unvaccinated. When clarity was sought on this matter, the Medical Chief of Staff at the JNF Hospital, Dr. Cameron Wilkinson, said that they preferred not to answer questions about the victim, preferring, at this time, to give some privacy to the family and loved ones.

However, the deceased was believed to have been hospitalized for a while before succumbing to his condition.

The Minister of Health also disclosed that “Over the last 12 hours, we obtained results of 28 positive test, with 26 in the prison, and two in the general population.”

Again, the appeal was made for residents not to venture outside during the current Stay at Home Order and curfew, and to practice the required non-pharmaceutical protocols.

More importantly, the appeal was made for residents to get vaccinated.