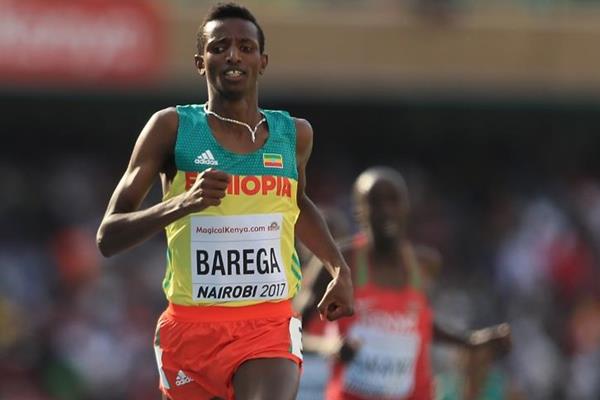 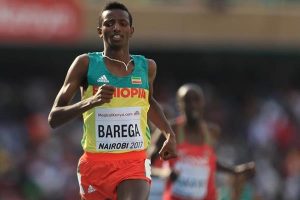 There is an unfamiliar feeling of unease that hits Ethiopian athletes when they prepare to make their indoor debuts. With no severe winter at home to necessitate indoor running venues, it is not unusual for them to fret about enclosed indoor arenas, banked tracks and the proximity of the running track to the crowd and field events.

“How can I run here?” Selemon Barega, the world U18 and U20 3000m champion said when he landed in Lieven, France, last month for his first ever indoor race.

“I thought all my weight would have to shift to one leg [after noticing the configuration of the surface]. I thought I was going to hurt my other leg when that happens.”

Luckily, none of that happened. What did happen was a performance that continued the 18-year-old’s meteoric rise after he clocked a world leading 7:36.64 to defeat his compatriot, the 5000m world champion Mukhtar Edris in a pulsating encounter. Far from giving in to his fear of enclosed spaces, it was a performance that in a way ‘lifted the roof’ at the arena and catapulted Barega to the favourite’s role in the men’s 3000m at the IAAF World Indoor Championships Birmingham 2018 which gets underway with the opening round on Friday (2).

“It was all about qualifying for the world indoors,” he said about his performance without a hint of gloating in his voice. “I had a very good race. I ran with the pacemaker for some time and started to lead the pack. In the last lap, I used all my energy to finish because I needed to secure the time to qualify for world indoors.”

After another outstanding performance and justified inclusion on Ethiopia’s team for Birmingham, there is yet more reason in Ethiopia to get excited about Barega, whose progression from gold in the U18 and U20 ranks continued with his fifth place finish in the 5000m at last summer’s World Championships. But what sets Barega apart from his fellow compatriots who have shown promise at the junior level before disappearing to mediocrity when joining the senior ranks?

“Selemon is a very, very special young man,” says his agent, Hussein Makke. “His age does not reflect his understanding of athletics and he has an unbelievable instinct for listening to his body and knowing his surroundings. His confidence in himself is really what sets him apart. There is no self-doubt at all in him.”

Barega himself is unfazed by the hype surrounding him. Instead, he confesses to watching hours of videos of Ethiopian superstars Haile Gebrselassie and Kenenisa Bekele in his down time to learn from them.

“I have [watched] videos of every top athlete,” he says. “I am a big fan of Kenenisa and Haile. I admire Kenenisa’s successes and his records. I love the tactics that Haile implements in his races.”

One lesson Barega would be keen to learn from his illustrious compatriots is how to handle the pressure of representing Ethiopia in a major championship. After winning U18 3000m gold in Nairobi in July and running 12:55.58 in the Lausanne leg of the IAAF Diamond League to qualify for the World Championships in 2017, Barega was overwhelmed by public pressure going into the 5000m final.

“I shared a room with Muktar [Edris] in the team hotel,” he says. “I watched national TV sports news from Ethiopia and realised what this race meant for millions of my people. I didn’t sleep well after that. The [final] race was not what I expected. It started slow and when I tried to come to the front, Mo [Farah] pushed me aside and so I stayed back. At the end, I finished fifth. I was happy that we were able to beat Mo Farah.”

“I think we can better the results [from previous World Indoor Championships],” he says. “I saw from watching videos that we [Ethiopia] do very well in the world indoors. We have some good runners in this team too.”

As Makke sees it, Birmingham will only be stepping stone in his growing international career.

“When he asked me about my expectations, I told him to go and have fun and enjoy the time in Birmingham and do his best,” he says. “Of course, his competitive side will force him to try to get the absolute best result there and I expect him to do well.”