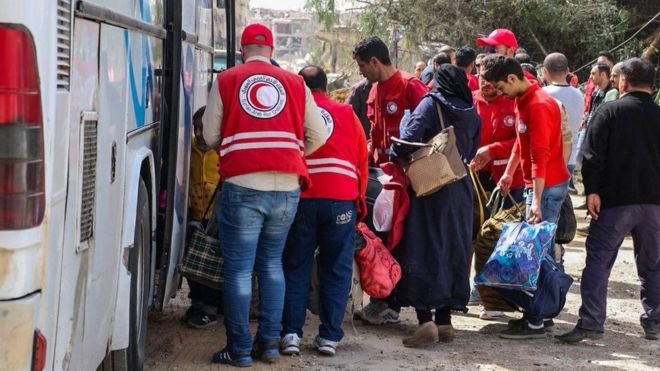 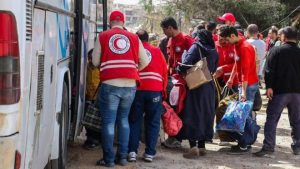 Syrian rebels and their families have begun leaving a key town in the besieged Eastern Ghouta area as part of an evacuation deal with the government.

State media said 88 rebels and 459 civilians had gone from Harasta so far.

Some 1,500 fighters from the Ahrar al-Sham faction and 6,000 civilians are to be transported from Harasta to the northern rebel-held province of Idlib.

The evacuation deal is the first agreed since pro-government forces stepped up an assault on the enclave a month ago.

A monitoring group says air and artillery strikes have killed 1,500 civilians, while at least 50,000 others have fled the siege on foot in recent days.

The exodus came after soldiers and allied militiamen drove rebel forces out of about 70% of the region, cutting it into three pockets – one of them around Harasta

The implementation of the evacuation deal, which was brokered by the government’s ally Russia, began on Thursday morning with a prisoner exchange.

State TV reported that 13 people held by the rebels were freed. It interviewed a soldier among them, who thanked God and the army for his release.

Later, the Syrian Arab Red Crescent confirmed that its personnel had entered Harasta and it posted photos of them helping civilians on to buses.

Ahrar al-Sham, which had controlled Harasta, agreed to lay down its weapons in Harasta in return for safe passage for its fighters to the rebel stronghold of Idlib.

The BBC’s Martin Patience in Beirut says the deal may put pressure on the rebel groups that control other parts of the Eastern Ghouta to follow suit.

Both factions have vowed to keep fighting, even as they have been driven further and further back.

Government air strikes killed at least 19 people on Thursday, according to the Syrian Observatory for Human Rights.

The UK-based monitoring group also said more than 4,000 civilians had fled Douma on foot and crossed into government territory through the al-Wafideen checkpoint over the past 24 hours. The civilians were leaving under an agreement between Jaysh al-Islam and Russia, it added.

Rockets and mortars are also still being fired by rebels into government-held districts of Damascus.

A police source told Sana that two civilians were killed and four others injured by a shell that hit the Barzeh area on Thursday.