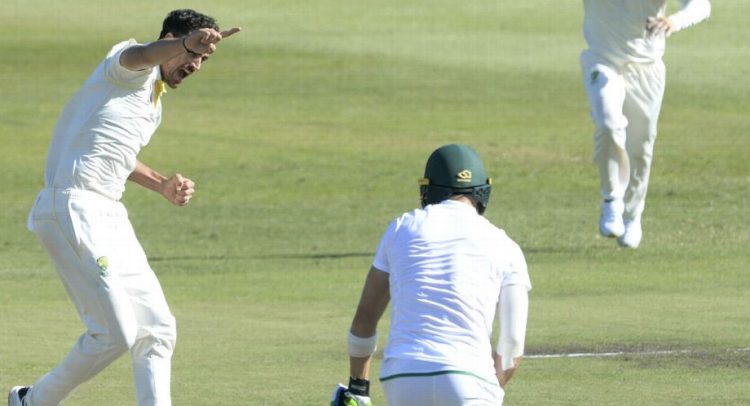 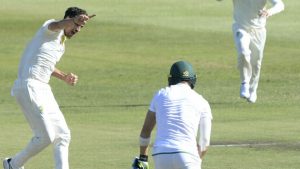 This was the reason South Africa picked an extra batsman. Australia’s attack, led by Mitchell Starc and Nathan Lyon, systematically dismantled South Africa’s batting order on the second day in Durban; such was Australia’s complete dominance that it seemed an achievement for South Africa even to avoid the follow-on. Starc wrapped up the day neatly with a five-wicket haul to dismiss South Africa for 162 in reply to Australia’s 351.

If the first four sessions of the Test seemed rather low-key, the octane level rose considerably after lunch on day two. Last time the teams met in Durban, in 2009, Australia did not even pick a specialist spinner, but here Lyon struck twice in his first over of the Test, removing Dean Elgar and Hashim Amla to open up South Africa’s order for the fast men. Pat Cummins then broke through with a fierce bumper, before Starc began his procession through the middle and lower order.

Only AB de Villiers looked like pushing South Africa to a competitive total, but almost inevitably he ran out of partners, left unbeaten on 71 when the final wicket fell to finish the day’s play. Fittingly, it was Starc who put the icing on the cake, or to coin a more appropriate Australianism, the coconut on the lamington, by trapping Kagiso Rabada lbw and smashing the stumps of Morne Morkel. Starc finished with 5 for 34, his best work having been done against the right-handers earlier.

Like a hustler of the highest order, Starc played the angles to perfection and conned mark after mark into nibbling outside off stump. Coming around the wicket, he found the perfect line and often enough moved the ball away, beating edges not left, right and centre, but left, left and left. This method first accounted for Faf du Plessis for 15, then Theunis de Bruyn – the extra batsman not helping South Africa – for 6, and finally Vernon Philander for 8.

It was an exquisite display of left-arm pace bowling, though Starc had support from all other members of Australia’s attack. Lyon was the man who sowed the first seeds of doubt in South Africa’s minds. His second ball of the Test caught Elgar’s leading edge and was brilliantly taken by the bowler leaping to his right, and three balls later Hashim Amla’s inside edge was snapped up at short leg by Cameron Bancroft to give Lyon a double-wicket maiden.

He later returned to add a third wicket, Quinton de Kock’s recent batting struggles continuing when he was bowled by Lyon’s quicker delivery for 20. Josh Hazlewood chipped in by rattling the stumps of Keshav Maharaj, which meant all four of Australia’s bowlers were wicket-takers. Cummins had earlier ended an enterprising innings of 32 from Aiden Markram, who could only fend an accurate short ball to Bancroft in close.

Markram was the only batsman beside de Villiers who threatened to worry the Australians. But really, de Villiers was in a league of his own. He scored all around the ground and was especially strong through the leg side, striking 11 boundaries on the way to his highest Test score since his recent return to the side. But one man making a half-century was nowhere near enough; South Africa needed a more even list of contributors, as Australia had possessed.

The day had started with Australia on 225 for 5 with Mitchell Marsh and Tim Paine at the crease. Paine edged behind off Rabada early, but Marsh compiled useful partnerships with Starc and Lyon to continue frustrating the South Africans.

Marsh seemed destined for a century, which would have been his second in consecutive Test innings, when he tried to bring up the milestone with a boundary over mid-on, where the giant Morkel hurled his hands up to clutch the chance. Had Temba Bavuma been fit and fielding there, Marsh might have had his hundred. Instead he fell for 96, but his impressively patient innings was more than enough for Australia to post a competitive total.

Starc had provided an entertaining cameo of 35 from 25 deliveries, clubbing two sixes over deep midwicket off Maharaj and striking four fours, including three in one Morkel over, before he was bowled by Maharaj. Cummins had fallen in similar fashion, bowled through the gate by Maharaj, though after an innings very different from that of Starc – Cummins occupied the crease for 38 balls for his 3 runs. His innings was just about the last quiet passage of play for the whole day.