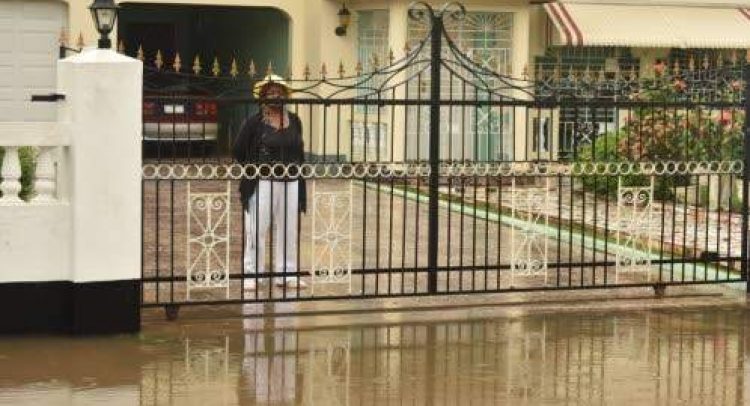 Some residents were left marooned in their homes, and several roads in this south-central town were inundated by floodwaters following heavy and persistent rain yesterday.

In mid-afternoon, Rose Mitchell expressed frustration at being cut off by above knee-high water in her yard at Harriott Meadows off the New Green main road.

“Is like I would take a ship and sail across the ocean, because there is no life I can live with this type of water. The whole place is under water,” she told the Jamaica Observer, adding that flooding has been a long-standing problem.

“For years I have been going through this problem and nothing has been done,” she shouted.

However, Councillor Jones Oliphant (PNP, Mandeville Division) told the Observer that a major contributor to the flooding was residents’ persistence in blocking natural sinkholes and waterways on their property. Residents should refrain from such actions without permission from the municipal corporation, he said.

Oliphant also said the rainfall yesterday was unusually heavy, in some cases overwhelming drains which had been recently cleaned.

Like Harriott Meadows, the neighbouring community of Ingleside was also flooded.

Landscaper Azariah Morgan described how high the floodwaters were shortly before the Observer visited the community.

There were similar scenes on Bonitto Crescent with plastic bottles seen floating in the water.

Some motorists made it through the floodwaters at two sections of deCarteret Road, but others weren’t so lucky. At Levy Lane mechanic John Holness told the Observer how a car stalled in floodwaters.

“Dem dig a pit deh suh wah day and it full. A years ago since dem dig a soak away and is a car mi go work pon fi come out… A years this yah problem deh yah,” he said.

Holness said drainage work done by the local municipal authority in recent years costing millions of dollars has not remedied the flooding problem.

“It is not enough… Earlier the water was above mi knee,” he said.

Oliphant was adamant that drains had been cleaned recently but that the unusually heavy rains twinned with bad building practices had escalated flood problems in parts of Mandeville.

“We have cleaned drains over the last couple of weeks, but today’s rain was very heavy and so we had a lot of flooding in the town,” he said by telephone yesterday.

“A lot of people have been dumping up sinkholes and waterways, so the water can’t run freely as it ought to. If you notice there is a lot of filling up of sinkholes taking place in and around Mandeville,” he added.

“We [Manchester Municipal Corporation] will have to find a way of monitoring…People who are blocking up sinkholes and gullies need to get permits, so that we can know that whatever they are doing is controlled… People are just filling [soakaways] left, right, and centre,” he said.

The initial cost of the project, which started in June, was said to be $3 million.

Oliphant explained that the initial plan to drill to 60 feet was extended to 305 feet and that more work is left to be done.

“The project at Villa Road is not completed. What is needed to be done now is to put in the catchment for the surface water and silt traps. Because of the inclement weather and COVID-19, we cannot move as fast as we would want to,” he said.

Main photo: Harriott Meadows resident Rose Mitchell is stranded in her yard following heavy rains yesterday. There is no life I can live with this type of water, she said.

In Asia next week, Pompeo expected to bolster allies against China