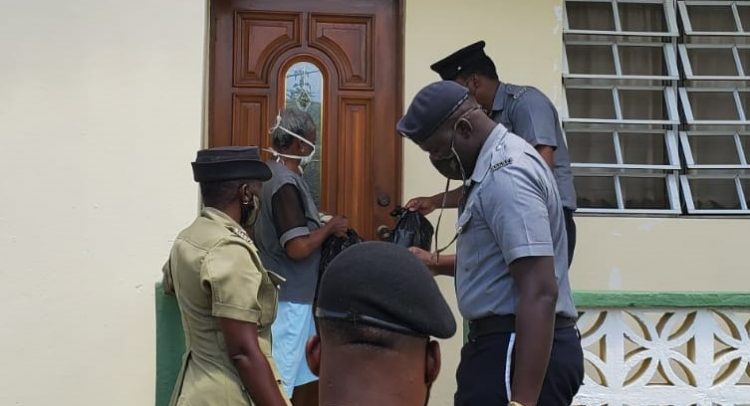 Fifteen persons in several rural communities were pleasantly surprised when care packages with much needed supplies were delivered to them over the weekend by the National Intervention Team.

The Team bought, packaged and distributed the items after it was brought to their attention that some of the older persons in rural communities were in need of food and supplies. The group had previously visited persons in Lodge, Ottleys, Molinuex, Phillips, Christ Church, Mansion, Tabernacle, Bellevue, Harris’ and Saddlers. The intention was to assess how they were coping under the current State of Emergency. The move is part of an ongoing COVID-19 community engagement initiative being undertaken by the National Intervention Team.

Team Leader, Inspector Rosemary Isles-Joseph, explained that the Team began community walk-throughs which they have since ramped up. They then decided to focus more on the elderly as they were considered more vulnerable.

She stated that during the visits, the Officers educated the elderly on how to stay safe. They encouraged them to wear masks whenever they had visitors, to practice social distancing and on proper hand hygiene. In addition to the care packages, Inspector Isles-Joseph noted that they will also address other issues that were brought to their attention including doing property checks and investigating smoke in the area.

Officer Kylon Lake, who is a member of the team, said that the elderly were happy to have the team spend time with them and were eager to be engage in conversation.

“The majority of the elderlies, all of them to be exact, welcomed us with open arms. They were very receptive, they spoke to us about their past, about their family, and about concerns in the community. They were glad to see us, especially the Police because apparently, for some of them, they didn’t have as many visitors and they’ve never seen the Police visit them before. They were also extremely happy for that and said to us to keep up the good work. It was really a great experience and I was touched, and I really believe they were touched as well,” he noted.

He also stated that many of the elderlies lauded Inspector Isles-Joseph for her leadership of the team and encouraged the Officers to stay strong as they understand that policing is not an easy career.

The Community Policing Team will be interacting with the elderly in all the communities throughout St. Kitts.