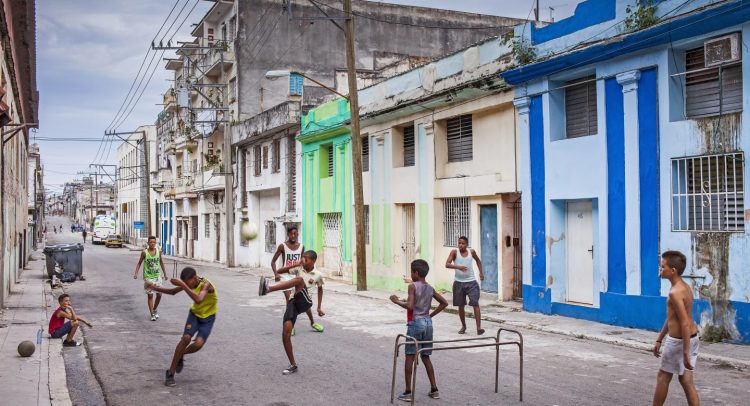 Like many Caribbean islands, football is beginning to be the sport of choice in Cuba.

For many years Cuba has been most known for producing top-class baseball players. The shift seems to be a generational one. As can be seen in these images, young kids playing football in the streets of Old Havana is a common sight.

“At this moment, football is liked like baseball in Cuba,” Cuba Football Federation President Luis Hernandez told Front Row Soccer. “The children, young people like football very much. If the national team of Cuba gets good results in this tournament [World Cup qualifying], more people will like football.”

Cuba is embarking on their FIFA World Cup Qatar 2022™ qualifying journey this week, where they will navigate a tricky looking Group C in the first round of Concacaf’s qualifiers. They started their campaign with a narrow 1-0 defeat by Guatemala in Guatemala City.

Pablo Elier Sanchez’s side will also come up against Guus Hiddink and Curacao, St. Vincent and the Grenadines and the British Virgin Islands.

Although the national team’s last, and only, FIFA World Cup™ appearance was at France 1938, where the Cubans edged past Romania into the quarter-finals only to be on the wrong end of an 8-0 humbling by Sweden, things are starting to look up in terms of regional results.

Cuba won the Caribbean Cup for the first time in 2012, before the regional tournament was abolished in favour of the new Concacaf Nations League. The Lions of the Caribbean have also consistently qualified for the bi-annual Concacaf Gold Cup since 1998, only missing out three times since.

Cuba can now also boast of having a player with Premier League experience in Norwich City’s Onel Hernandez. Although the Canaries are now playing in a division below, a return to the top flight looks inevitable, so it is feasible that Hernandez could be scoring goals in one of the top leagues in world football again later this year. And in the country’s latest national team squad, there have been call-ups for players plying their trade in Spain, San Marino, USA and Brazil.

“We have so many kids in Cuba that love football, and they want to live the dream that I lived,” Hernandez told the New York Times.

Cuba’s history at the top of the game stretches way back. There were four Cubans on the first ever Real Madrid side founded in 1902, and if the ubiquity of young children playing football across Havana’s streets and pitches is anything to go by, there could be 21st-century heroes suiting up for Los Blancos in the near future.