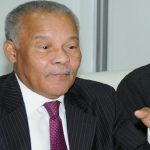 In an emotional farewell speech in the House of Assembly this afternoon, former Prime Minister Owen Arthur left a piece of economic advice which he said could save the country from further decline.

Arthur, who yesterday ended 35 years as a legislator, told Parliamentarians during his contribution to the debate on the 2018-2019 Estimates of Revenue and Expenditure that they needed to face up to the reality that the International Monetary Fund (IMF) was the answer to the economic problems.

“There has to be a stimulus in the short term to stabilize and bring about growth while we go about the medium and longer term matter in trying to transform the economy,” the former political leader of the Opposition Barbados Labour Party (BLP) said, adding that the immediate task was to get spending power of the kind that could be sourced from the IMF and other financial institutions such as the Caribbean Development Bank (CDB) and Inter-American Development Bank (IDB).

The noted economist said that once this was done, it would serve as an injection into the revenue stream that could “stop the body from being at rest and would be the factor that would allow you to be able to start to grow”.

Arthur, the country’s longest-serving Prime Minister, warned that if his prescription were not applied, “this body which is at rest will remain at rest”.

Strengthening his argument that the IMF was the preferred way to go, the respected retiring parliamentarian said the homegrown Barbados Sustainable Recovery Plan (BSRP), which he endorsed, should be the catalyst for funding from the international lending agency.

With a general election around the corner, he assured the Government it ought not be afraid of the IMF anymore, since the lending agency now had a flexible credit line that has benefited other Caribbean states, all with economies that are growing fast.

“The International Monetary Fund would have in the past related to countries entirely on the basis on financial quantitative targets. It has changed its ways and now enables countries to have what is called flexible credit lines,” he said.

“I sat with the Government of Grenada for a weekend when they had to prepare a programme with the International Monetary Fund and helped them to structure a programme with the Fund to fit into the new approach that the Fund has to lending countries . . . and you have a situation now where the countries in the Caribbean that are growing the fastest are those that are using flexible credit lines with the International Monetary Fund,” the former Prime Minister recalled.

He said the Grenada programme was based on a homegrown programme similar to the BSRP.

“The Government of Barbados now has a homegrown programme . . . that could be the basis of something to be put before the Fund as the Government’s approach to rescuing the Barbados economy to be tweaked after further consideration with the International Monetary Fund,” Arthur suggested.

Noting concerns by the House that the recovery plan had been presented to the Chamber at the last minute, the former Prime Minister advised the Freundel Stuart administration that if in fact it was using IMF special drawing rights or talking to the Fund about a programme, and if it wanted the recovery plan financed by that institution, a wide discussion should be held on the matter.

Arthur even hinted that he would be willing to assist.

“But I am begging the Government not to go the way of Jamaica,” he warned, adding that the IMF was considering a macroeconomic plan for Jamaica while a regional team was examining an emergency production strategy which bore no resemblance to the IMF programme.

He noted that the regional team was unaware of the IMF plan which did not turn out at all well for that country.

Arthur also placed the issue of privatization on the table, advising his former party colleagues in the Barbados Labour Party (BLP), not to fear it.

He listed a number of BLP candidates who lost in 2008 when privatization was not a campaign issue, but won in 2013 when it was, to press home the point that the BLP should deal frontally with the topic.

The former BLP political leader reminded its members that dealing with major economic matters, no matter how controversial, was an important aspect of the party’s heritage from its first leader, Grantley Adams, through to himself.

“And I would want them to feel that they can join the great debate that is necessary in the knowledge that great causes as [former Jamaica Prime Michael] Manley said are never won by doubtful men,” he said.

Therefore, he suggested that the next election should be a great conversation about the future of this land.

“And those who served with me in Cabinet knew that I used to tell members of my Cabinet if we have a problem let us face it and let us fix it. And I want to say as I come to the close of this address to the House that what is before Barbados is nothing that Barbados cannot cope with. What is before us is the greatest challenge that we have ever faced, but that we must not fail Barbados,” the former Prime Minister advised.