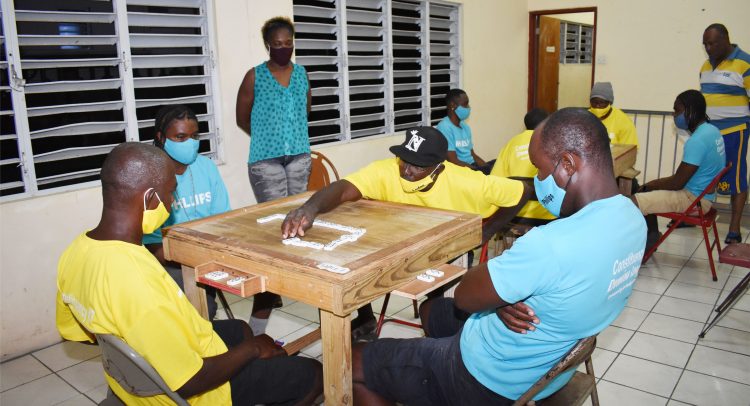 The two teams did not have the full complement of players, as Lodge had only four, while Phillips had five. The game, which was played at the Lodge Community Centre, was refereed by Octavia ‘Tackie’ Huggins and Valencia Alexander who were assisted by Norris ‘Chuck’ Sharry, while Ameer Ali was the scorer.

Phillips drew the first blood when Tyke ‘Barbie’ Isaac and Sheldon ‘Blamzim’ Augustus took the first game from table one by scoring 118 points again 10 points by Lodge. Lodge quickly hit back from table two by winning the second game after Captain O’Niel Thomas and Javed Thomas scored 112 against Phillips’ 95 points.

Lodge took on the offensive and were leading 7-4 as they prepared to go for the half time break and decided to do so in style when from table one McAllister Thomas and Horatio Thomas hit 104 points before Phillips could get a single point which gave them a bonus game and hence they led 9-4 by half time break.

On return from break, Phillips came back breathing fire by winning six straight games, two of them being bonus games to temporarily overtake Lodge and were leading 10-9. Lodge hit back and equalised by winning a game from table two, but Phillips went one up from table one to make it 11-10 in their favour.

At that stage Lodge upped their game, and won the remaining games and by 10:46 pm they clinched the decider from table two when O’Niel Thomas and Javed Thomas attained 118 points as Phillips were at 71 points, giving former champions Lodge Domino Club the 13-11 win and the overall third position came with it

The finals of the 25th edition of Constituency Number Seven Dr the Hon Timothy Harris Domino League, between former champions Unity Domino Club and Tabernacle Domino Club in a clash of best of three encounters, will be held tomorrow Thursday October 15 at the Lodge Community Centre starting at 7:00 pm.

Main photo: McAllister Thomas of Lodge Domino Club in action at the Lodge Community Centre where they met and beat Phillips Domino Club 13-11 in a third/fourth position play off.