The argument presented in some quarters, is that some former workers were short-paid.

They have charged that they are still owed sums of money by the government; money which they claim should have been paid to them when they were severed back in 2005, when the industry folded.

The recently appointed Minister of Agriculture in the Labour Government of Prime Minister Dr. Denzil Douglas, on Monday (18th February, 2013,) made an attempt to clear the air on the subject when he was asked, “When will the matter of the payment of severance pay be settled for those former sugar workers who were able to leave the SSMC before the closure of the sector?”

Someone submitting a question to the radio talk show on Freedom FM Radio said they were “due severance payments before they left the SSMC but are still waiting. They claimed that the former minister (Cedric) Liburd did nothing, former minister (Dr. Timothy) Harris represented his constituents well on this matter and it’s about time the workers from the other constituencies get their hard earned money and not just the $1,500 that was paid to them.”

However, Minister of Agriculture Mr. Nigel Carty responded by stating that  “This is a very difficult question, for the very obvious reason that by law, severance pay really relates to persons who have been severed from an industry, a place of work, an organization, an institution. Persons who would have left the SSMC, the sugar industry, in advance of the closure which happened in 2005, really may not be able to make a very strong case for severance pay. It’s a matter that we have looked at long and hard, and I think we are still wondering what is the best way forward, given that people feel a very strong sense of entitlement.”

The Agriculture Minister revealed that he spoke with a gentleman from his own village around the time the industry was closing. Carty explained that the man had left the sugar industry some 20 years, prior to 2005; he is about 95 or 96 years old and he was at a loss to understand why it is, he had worked in the sugar industry for almost 50 years, if not more, and at the closure of the sugar industry he wasn’t entitled to severance pay.

“And I was at pains to indicate to him that perhaps there is some other thing we can do, to give all those persons who had worked so long and hard in the industry, something that makes them feel they have earned something after having worked so long. But I don’t think that severance pay is the concept that gives coverage to that idea,” stated Carty.

But Carty admitted that perhaps government can look at something else which can give people the comfort that would recognize their worth, their value and their hard work.

“We gonna have to design something of a gratuitous package to deal with them”, assured the minister.

However it was pointed out to the minister that there is still a sense that many of former sugar workers feel that they are owed monies.  Carty was therefore specifically asked by the interviewer if there are former sugar workers who are still owed monies at all.  The minister however avoided a direct answer, but instead attempted an explanation of what happened when the payments were made in 2005. 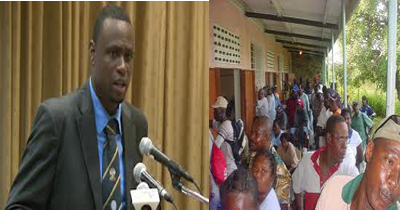 He said, “There are some of them who still feel they are owed money. I can tell you that the sugar workers have been paid handsomely. They were able to get a package which was designed by the union as an agreement between the union and the SSMC back in the 1960s or early 1970s. That package was better than what was offered under the severance pay Act… or the Protection of Employment Act. The Protection of Employment gave a kind of package which didn’t really amount to the kind of monies that workers would have earned under the agreement that was between the SSMC and the trades union. And so we are very confident that persons got paid very handsomely. Of course there were persons who had gotten over a $100,000 because of the time they worked and based upon the kind of income that they were making.”

Carty continued, “Because the amount payment you got was related to the amount of income which you were receiving. And there were others who didn’t get as much, they got $20,000, $15,000, $30,000 and for some reason they were not satisfied, but I believe that at the end of the day, the government did what was the right thing. We gave them the better of two packages which were available…a package available under the severance payment Act and a package under the agreement between the SSMC and the trades union.”

The Minister of Agriculture indicated that there were persons, who had not worked long enough to have earned the kinds of benefits that they would have liked to make, and there were persons who had left the industry some years before the closure, and they felt that they were left out of the deal. We understand that people were feeling very much disaffected, by the fact that having left the industry before it closed they were not entitled to the large sums which other persons who stayed until the end, would have received.”