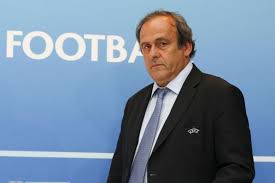 Platini’s representatives denied any wrongdoing on his part, saying he is “absolutely confident in the future” and has “strictly nothing to reproach himself for.”

Also questioned Tuesday were two one-time associates of former French President Nicolas Sarkozy, adding a layer of political intrigue to the investigation of the hugely controversial decision to hold soccer’s showcase tournament in a desert country so scorching hot in June and July that the matches will be played instead in November and December.

As head of European soccer’s governing body UEFA, Platini was the continent’s top representative on the FIFA committee that picked Qatar in 2010.

The closed-door, secret-ballot vote baffled many at the time, not least because the Persian Gulf nation has no soccer pedigree to speak of. But gas-rich Qatar is pouring billions into the world’s most popular sport and has the means to finance new stadiums.

Platini, 63, was taken into custody after being summoned to a French police anti-corruption and financial crimes office outside Paris, a judicial official told The Associated Press, confirming a report by online publication Mediapart. The official was not authorized to discuss the investigation and spoke on condition of anonymity.

French authorities did not announce any charges against the soccer legend or say exactly what he was being asked. He can be held for questioning for up to 48 hours, after which he can be either released or formally charged.

It was the latest turn in a string of scandals in recent years that have brought down dozens of soccer officials from FIFA and other organizations over such offenses as vote-buying, kickbacks and bribery.

French prosecutors are known to be investigating an array of winning bids for major sports events, including the 2018 World Cup, awarded to Russia, the 2020 Olympic Games in Tokyo and track and field world championships.

Qatar beat the long-favored United States 14-8 when FIFA selected the host country for the 2022 World Cup.

Former FIFA President Sepp Blatter, who presided over the vote, has accused Platini of backing out of a secret “gentleman’s agreement” to award the tournament to the United States after meeting with Sarkozy, France’s president at the time.

Platini’s representatives said he was taken into custody only for “technical reasons.” His lawyer, William Bourdon, explained that police wanted to ensure that Platini and other witnesses couldn’t confer with each other about their accounts.

Ahead of the FIFA vote, Sarkozy hosted a meeting in November 2010 that brought Platini together with Tamim bin Hamad al-Thani, then the crown prince of Qatar and now its ruling emir. Al-Thani also owns the French soccer club Paris Saint-Germain, and Sarkozy frequently attends its games.

Platini has long insisted that the meeting did not influence his vote for Qatar less than two weeks later.

“Sarkozy never asked me to vote for Qatar, but I knew what would be good,” he told the AP in 2015. But in the same interview, he also said that he “might have told” American officials earlier that he was going to vote for the United States’ bid.

Blatter quoted Platini as saying ahead of the vote: “I am no longer in your picture because I have been told by the head of state that we should consider the situation of France.”

FIFA had no comment on Platini’s detention and said it has made a “full commitment to cooperating with the authorities.”

As a player, Platini was one of the best ever, a creative midfielder who lit up the pitch for club and country. He helped France reach the World Cup semifinals in 1982 and 1986 and led his national team to the 1984 European Championship title.

He also played club soccer for Nancy and Saint-Etienne before switching to Italian club Juventus. He won three straight Ballon d’Or titles as the best player in Europe while playing for Juventus from 1983 to 1985.

Both Platini and Blatter were toppled from their positions at the top of soccer in 2015. Platini was banned by FIFA for financial misconduct in connection with a $2 million payment authorized by Blatter — a suspension set to expire in October.

PRIVATE SECTOR MUST PLAY ITS PART IN CREATING JOBS