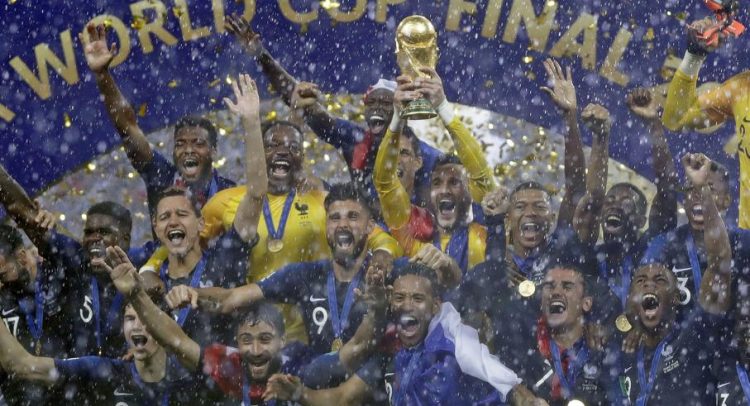 France celebrated their second World Cup win 20 years after their maiden triumph on Sunday, overcoming a passionate Croatia side 4-2 in one of the most gripping finals in recent history.

The breathless victory under stormy skies at Moscow’s Luzhniki Stadium means Didier Deschamps’ side – balancing youthful zest and tournament nous – have buried the pain of their defeat in the Euro 2016 final on home soil.

For Croatia, a country of just over four million people, the loss spells bitter pain but their fans celebrated the best run in the nation’s history, which featured a stunning win against Argentina and a semi-final victory against England.

Croatia started the match strongly but an own goal from Mario Mandzukic and a controversial VAR-assisted penalty from Antoine Griezmann following an Ivan Perisic leveller gave France a 2-1 half-time lead.

Further strikes from Paul Pogba and Kylian Mbappe gave France a comfortable cushion before a late consolation from Mandzukic after an error by French goalkeeper Hugo Lloris.

Deschamps, thrown into the air by his ecstatic players as they celebrated their win, said the victory was “just as big and just as beautiful” as the 1998 triumph in France.

“There are two things that matter – one is that these 23 players are now together for life, whatever happens, and also that from now on they will not be the same again, because they are world champions,” he said.

“To be champions of the world as professional footballers, there is nothing better.”

Deschamps, who captained the team when they lifted the World Cup in 1998, has become just the third man to win the trophy as both a player and a manager after Franz Beckenbauer and Mario Zagallo.

“We did something incredible, we made history and we are going to enjoy it,” said France goalscorer Griezmann.

US President Donald Trump quickly sent congratulations to France for their “extraordinary soccer” and also praised Russia’s President Vladimir Putin for his hosting of the tournament, which he described as “one of the best ever”.

French President Emmanuel Macron, who had punched the air during the match and stood next to Putin on the podium, tweeted simply “MERCI” to the team.

Putin said Russia could be “proud” of its hosting of the football World Cup, judging it a success “in every respect”.

He added that foreign visitors holding fan ID cards for the World Cup could have visa-free entry to Russia for the rest of 2018.

In chaotic scenes during the post-match French press conference, the celebrating players burst in, soaking Deschamps with drink.

Across France, people erupted in joy, with fans streaming into the streets, honking car horns and flying the tricolore flag at the start of an enormous national celebration.

Croatia dominated the match for large periods, enjoying 61% of possession, but the French defence for the most part held firm and France took their chances with devastating efficiency.

Arguably the turning point of the match was when referee Nestor Pitana awarded France a penalty for handball after consulting the video assistant referee (VAR).

As thunder rolled around the stadium, Griezmann was made to wait but he held his nerve to lash the spot-kick into the net.

Even before the final whistle in Moscow, crowds packed the Champs-Elysees avenue in Paris in a repeat of the scenes of 20 years ago when more than a million people partied there.

Cheers rang out throughout the country for each of four goals, transforming the young team into national icons.

Croatia coach Zlatko Dalic said his side’s luck had run out after the VAR penalty.

“I never comment on referees but in a World Cup final you do not give such a penalty,” said Dalic, whose team had to battle through extra-time in all three of their knockout games before the final.

But he added: “You should never give up, never stop believing. At 4-1 down I was not defeated. Overall, Croatia played a great tournament and showed its strength and quality.”

Disappointed but proud Croatian fans in Zagreb applauded their team as their “heroes”.

When it was over, applause from tens of thousands of Croatian fans rippled through the capital’s main Jelacic square as many lit flares and set off firecrackers.

Croatia’s Luka Modric won the best player of the World Cup award, with Mbappe picking up the prize for best young player.

Belgium stopper Thibaut Courtois was named the best goalkeeper of the tournament while England’s Kane won the Golden Boot as top-scorer.