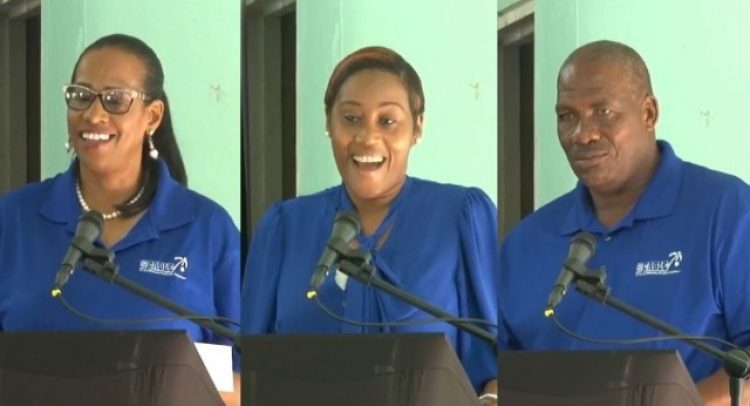 Basseterre, 22nd January 21, 2021 (MyVue News.com)-A joint effort on Friday, 22nd January, 2021, between The Cable and various ministries of Government, including Communications and Community Affairs, saw the launch of a new initiative to provide free internet service at the various community centers around the island.

Chairman of The Cable, Othneil Hyligar told the gathering that while the service is being provided free to residents, it is not without expense because there is a cost being borne by others, in this case The Cable. He therefore urged all potential users to demonstrate some semblance of responsibility when accessing the Wifi.

Hyligar admonished residents of the area, saying, “One thing that we need to do when we put this equipment inside here, am asking the people of the Village Community, to take care of the equipment.”

“You cannot vandalize it, or one person can’t come in and steal it, because then you would deprive all the other persons who are willing and ready to use it…of that opportunity, ” added the Chairman.

The project was kicked off at a ceremony at the St. Johnson Community center in La Guerite, which is serving as the first entity to be outfitted with the technology.

Chief Executive Officer of The Cable, Pat Walters said that this is just the start, because all 16 community centers in St. Kitts will be provided with wifi.

Walters said that the Wifi has been placed in all sections of the two main buildings that comprise the center, plus the immediate outside where the stage is located.

She opined that “access to technology is one of the great dividers left in the world. And we, The Cable, together with other internet providers, the Government, the Ministry of ICT… we are all determined to leave no citizen behind, in our quest of digital transformation. This is an all of society approach, and it is a partnership between the government and private sector.”

Minister of Communications, Akilah Byron Nisbett, added her voice to the occasion and revealed that “If we look at the internet penetration rates in St. Kitts & Nevis, we would see that about 90% of our population, interacts with the internet in some way, shape or form.”

She said that the vision of the Government is to make St. Kitts & Nevis a world leader in digital services delivery, for citizens, residents, the private sector and investors, in a manner that is safe, efficient, interactive and responsive to the needs of end users, and which would allow for economic growth and contribute to national development.

The Minister also used the opportunity to make an appeal for corporate support for the community centers, by providing tables, chairs, computers and other much needed items for the operations of the facilities, because, as she said, “Government cannot do it alone.”

Smoke your marijuana at home or get arrested warn police