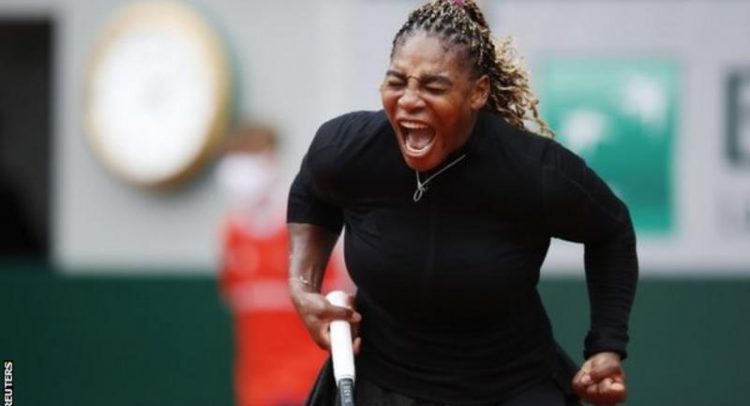 Serena Williams began her quest for a 24th Grand Slam title with a hard-fought win over fellow American Kristie Ahn in the French Open first round.

Once she came through a 74-minute opener, Williams began to play with more belief and clarity as she swept Ahn aside in a 27-minute second set.

Williams will play Bulgaria’s Tsvetana Pironkova in the second round.

Pironkova, 33, was handed a wildcard by Roland Garros organisers after a memorable run to the US Open quarter-finals – where she lost to Williams – in her first tournament since 2017 after giving birth.

Pironkova set up the rematch with a 6-3 6-3 win over Germany’s Andrea Petkovic.

Age is not diminishing Williams’ desire
Williams might have celebrated turning an age at which most players have long retired, but she has lost none of her appetite when it comes to trying to land another Grand Slam title.

One more major triumph would see her equal Australian Margaret Court’s long-standing record and become the fourth mother to win a Grand Slam.

The passion of the American is undiminished, saying in the build-up that she would not play on the clay courts in Paris if she did not believe she could win.

Going out in the semi-finals at the US Open was – by her standards – regarded as a disappointment and even though she is not considered one of the favourites on her least favourite surface, anything other than victory at Roland Garros will also be viewed by her as another failure.

That desire was illustrated perfectly by a fervent celebration – a ripping roar and shaking clenched fists – after she edged a nervy opening set to gain the upper hand against an inspired Ahn.

And the relief of taking the lead allowed Williams to loosen up in the second set.

Williams had not played on clay since losing to 20-year-old Sofia Kenin in the third round at Roland Garros in June 2019 and looked understandably rusty as world number 101 Ahn made a confident start.

Ahn lost in straight sets when the pair met at the recent US Open but, after breaking for 2-1 lead and then again for 5-4, had the chance to serve out the opener.

Williams, however, broke back at the crucial time and then dominated the tie-break as Ahn’s chance disappeared.

That saw the confidence of the two players completely switch. Williams looked more assured as her footwork and shot-making improved, racing towards victory with Ahn wilting.

Williams had a slight wobble in what proved to be the final game, eventually sealing the victory with an ace out wide on her fifth match point.