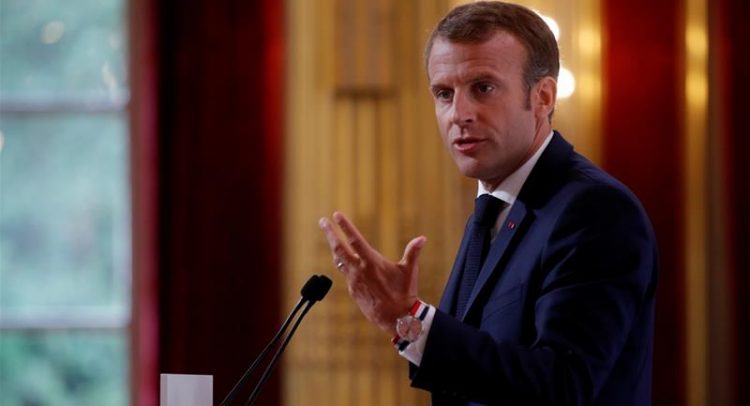 French President Macron: Europe cannot depend on US for security The European Union must stop depending on the United States for security and must now rely on its own military forces for protection, France’s President Emmanuel Macron said.

In a speech to French ambassadors on Monday, Macron said he would put forward new proposals to the EU to boost security and that all European nations, including Russia, should be involved in discussions on defence cooperation.

“Europe cannot rely on the United States only for its security,” he said. “It is up to us to meet our responsibilities and guarantee our security.”

Since his election in May 2017, the 40-year-old leader has campaigned for a more integrated EU with a common defence budget and security doctrine.

During the speech, Macron said cooperation with Russia should occur on the condition that progress is made with Moscow on the fighting in eastern Ukraine.

Paris is pushing for full implementation of the 2015 Minsk peace agreement that was sponsored by France and Germany to settle the conflict in Ukraine, which has killed at least 10,000 people since 2014. In November, EU countries launched an unprecedented programme of joint military investment aimed at confronting EU security challenges. Twenty-three of the 28 member states signed up to the plan.

Macron called on Europe to be “a trade and economic power” that defends its strategic interests and financial independence with tools that can fend off US extraterritorial sanctions.

“Multilateralism is going through a major crisis which collides with all our diplomatic activity, above all because of US policy,” he said.

“The partner with whom Europe built the post-World War order appears to be turning its back on this shared history,” the French president said.

Meanwhile, Germany’s foreign minister said on Monday that European nations must fill the gaps left by the withdrawal of the US from international organisations and key regions of the world.

Heiko Maas told German diplomats in Berlin that Europe should increase its political and financial weight at the United Nations and the World Trade Organization – both of which have come under pressure from Washington since Trump took office last year.

He also urged Europe to step up its activities in the Middle East, Africa and western Balkans, warning that “the cost of war, poverty and displacement in our neighbourhood … is borne by us Europeans”.

Maas said while Europe should seek to “rebalance” its relationship with Washington, “the goal is never ‘Europe first'”.

Barbados government says there will be no mass layoffs