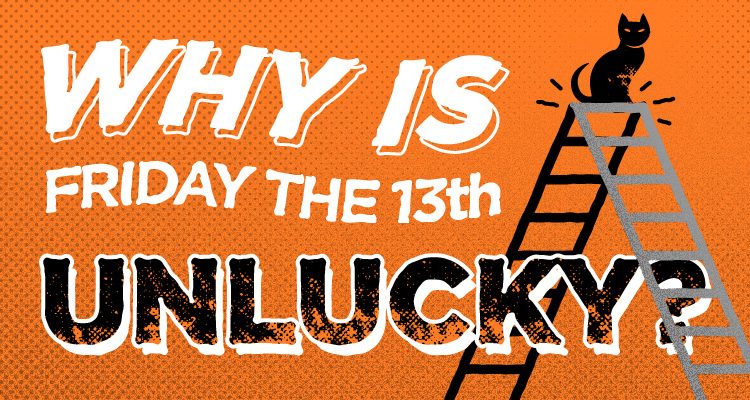 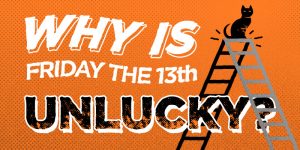 It’s the scariest day of the year: Friday the 13th! As those with triskaidekaphobia – the fear of the number 13 – run and hide, find out why this day sends shivers down so many people’s spines.

1. Triskaidekaphobia is real – and millions of people have it. It’s not just a word that will win you all the points in Scrabble. Triskaidekaphobia is an irrational fear of the number 13, and if there’s one day when triskaidekaphobia runs rampant, it’s Friday the 13th. While the idea of being afraid of a day might seem silly to some, an estimated 10% of the U.S. population has a fear of the number 13, according to History.com. Oh, by the way, fear of Friday the 13th has its own name: paraskevidekatriaphobia.

2. Fear of 13 has roots in history and mythology … While most fears – snakes, heights, public speaking, etc. – seem logical at first glance, the fear of a number isn’t so easily explained. It’s not entirely known how 13 became unlucky in the Western World. There’s a superstition rooted in Christianity, as Judas Iscariot was the 13th guest to the Last Supper (held on a Friday, btw.) Similarly, in Norse Mythology, Loki was also the 13th guest at a dinner party in Valhalla, leading to the death of Baldur.

3. … and in numerology. When trying to explain why 13 is scary, mathematicians and scientists point to the preeminence of the number 12 being considered the “perfect” number in the ancient world. There are 12 months in the year, 12 signs of the zodiac, the 12 gods of Olympus, the 12 labors of Hercules, the 12 tribes of Israel, and the 12 apostles of Jesus. With 12 being “perfect,” 13 seems a bit…off.

Thomas Fernsler, an associate policy scientist in the Mathematics and Science Education Resource Center at the University of Delaware in Newark, said 13 “has to do with just being a little beyond completeness. The number becomes restless or squirmy.”

4. Businesses and buildings have triskaidekaphobia. As of 2013, less than 5% of residential condo buildings in Manhattan and Brooklyn had a 13th floor. “I’m not particularly superstitious myself, but not having a 13th floor is a no-brainer,” building developer Izak Senbahar told Journal, per TIME.

“You don’t want to preclude anyone, a buyer who happens to be superstitious,” he added. Ryanair, the Dublin-based airline, doesn’t have a Row 13 on any of their planes. Other airlines avoid using the number 13 on aisles, flights and gates, both to conserve space/fuel and because of superstition.

5. The number 13 terrifies even the master of horror. Don’t think triskaidekaphobia is serious? The number 13 scares Stephen King, the man whose nightmares have kept people up at night for decades. “I always take the last two steps on my back stairs as one, making 13 into 12 (there were, after all, 13 steps on the English gallows – up until 1900 or so – and executions were traditionally carried out on Fridays),” he wrote in 1984, a year with three Friday the 13ths.