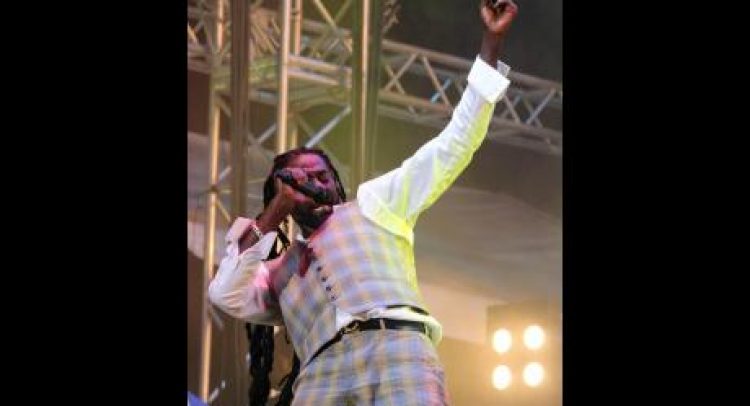 Fans of Buju Banton have been holding their collective breaths in anticipation of the arrival of his first album in over a decade. Originally set to be released in April, the date was pushed back. The wait, however, could come to an end later this month, and on Monday, the reggae and dancehall singer used social media to announce that another single will be released on June 12.

Against a background of a video featuring Black Lives Matter protesters, Banton chants lyrics which immediately dismiss any suggestions of him being a ‘wagonist’. The song, which seems to be titled Blessed, begins, “Ah nuh juss now, we ah scream and a cheer fi di team, Dem a plan how fi bench we and a dem rule supreme, Like a dem one fi clean…” and then cuts to what fans have been waiting for, “This Friday, tell dem seh we Blessed Upside Down 2020”. In the caption, he states, “In the dark we must find the light, even during these times … .”

Upside Down 2020 contains 20 tracks, and the reason for that is partially obvious. “This album comprises 20 tracks. Why? Because it’s 2020 … 2020 has a deeper understanding in my mind. It resonates with a clear vision and seeing things for what it is. And another reason, after a 10-year absence, we try to give the people some music for that missing time,“ Banton is quoted in an interview with Silverstar-NRG Radio.

RAVE REVIEWS
Interestingly, his previous album, Before the Dawn, which was released in September 2010, had 10 songs. An Amazon.com review said of the set, “The 10 powerful tracks that comprise this very special project are easily some of the most prophetic songs written by Banton since his extraordinary entry into the music business over 20 years ago. Before the Dawn literally pierces the soul with traditional roots, easy rock and especially heartfelt reggae.” Before the Dawn went on to win the 2010 Grammy Award in the Best Reggae Album category.

Buju Banton’s co-manager, Donovan Germain, hailed Upside Down 2020 as “a good effort from an artiste who has had to be reintegrated into the system after 10 years. It’s the best possible effort at this time”. The legendary Penthouse Records producer, however, would not entertain a conversation about a possible Grammy nomination for the project. “I don’t ever think of Grammy when working on a project. Grammy doesn’t ever come into my consciousness. We make music for the love of it, not for Grammys. If the accolades come, they are appreciated,” he told The Gleaner.

At listening sessions in March, presided over by Banton himself, the album was previewed to small groups of local and international press. In an Instagram post, broadcaster Richie B commented, “This project will be a game changer. The world will never be the same. Reggae music and dancehall nice again.”

Ganja Man, which is said to be one of the singles, was released on April 20, known globally as ‘4/20’, a day to celebrate all things marijuana. Memories, a song with John Legend, had its world première on May 8.

Since his release from a federal prison over one year ago, Buju Banton has been selectively releasing singles, among them Steppa; Holy Mountain, a collab with Sizzla, Mavado and 070 Shake; Country for Sale; Dangerous City, a collab with dvsn and Ty Dolla $ign; a remix of Trust with Tory Lanez; and Murda She Wrote, which was featured on the Bad Boys For Life movie soundtrack.

Amazon bans police use of its face recognition for a year