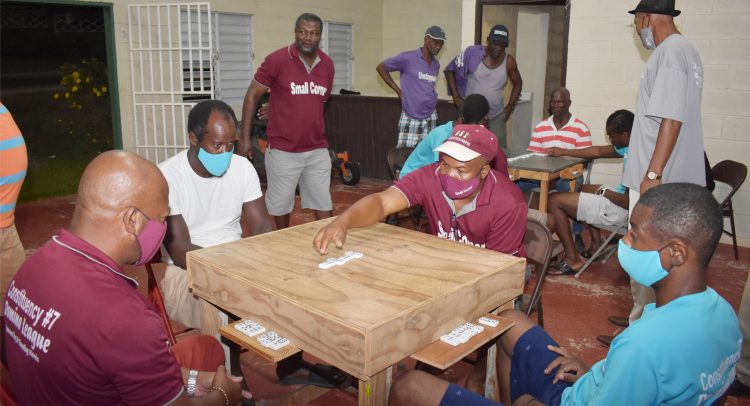 Frontrunners Unity Domino Club and Phillips Domino Club were held in check on Sunday September 20 during the ninth segment of play in the second round of the 25th edition of Constituency Number Seven Dr the Hon Timothy Harris Domino League.

Small Corner Bar Domino Club who had in the first round ended Phillips Domino Club’s unbeaten run, proved the feat was not a fluke when playing at the Edgar Gilbert Sporting Complex on Sunday they floored them again by beating them 14-10.

Molineux Domino Club and Guinness Domino Club amicably rescheduled their Sunday game at the Edgar Gilbert Sporting Complex pavilion in Molineux to yesterday Monday September 21, and when they met, Molineux continued with their newly found winning form by beating Guinness 14-8.

Unity, Tabernacle, Molineux, and Guinness have played one game more than the other teams whose games were affected by the power outage experienced in most parts of the island on Thursday September 17.

Games continue today Tuesday September 22 with the tenth segment of play in the second round of the 25th edition of Constituency Number Seven Dr the Hon Timothy Harris Domino League and will be taking place at the usual three venues. All games start at 7:00 pm.

Grounds of the Tabernacle Police Station will be the venue of Christchurch vs. Unstoppable and Saddlers vs. Small Corner Bar games; Edgar Gilbert Sporting Complex pavilion in Molineux, will host Phillips vs. Guinness and Giants vs. Molineux games; while three games Lodge vs. Parsons, Tabernacle vs. Unity, and Sylvers vs. Mansion will be played at the Lodge Community Centre in Lodge Project.

Church leadership to PM Harris: After your political career, step into the pulpit