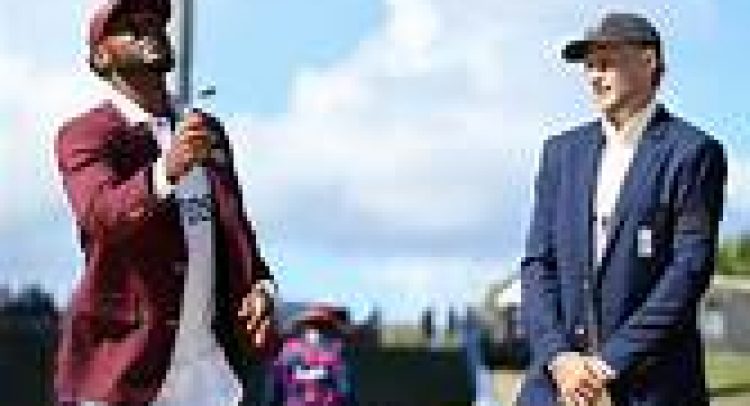 ST JOHN’S, Antigua (CMC) — Beleaguered West Indies are refusing to take hope from the absence of the iconic fast bowling duo of Jimmy Anderson and Stuart Broad when they clash with England in the opening Test of the three-match series starting at Sir Vivian Richards Stadium here today.

The home side are anxious to turn the page on their wretched run of form last year in the longest format, which yielded three wins in 10 outings and a single series success away to Bangladesh with a weakened squad.

But even with England overhauling their squad for the Caribbean campaign in the wake of their recent Ashes disaster, Head Coach Phil Simmons said there would be no complacency in his side about any perceived weakness in the opposition.

“You can call it an advantage but again, no Broad, no Anderson — we keep harping on that — but when you don’t have the experience you have young fellas who are hungry to make their name, and that is something you have to guard against too,” Simmons told a media conference on Monday.

“We have not been looking at the fact there’s no Broad and Anderson; we’ve been looking at who there is and there is still some quality bowlers in there which we still have to bat against.”

Anderson and Broad are England’s most seasoned bowlers with 1 177 wickets and 321 Tests between them, but were casualties of the side’s 4-0 drubbing down under earlier this year.

Their absences have left England’s attack, with the likes of Ollie Robinson, Mark Wood, Chris Woakes, Saqib Mahmood and Craig Overton, representing a total of 80 Tests and 262 wickets.

West Indies, too, have made their changes. Roston Chase, Rahkeem Cornwall, Shai Hope, and Jomel Warrican have all been discarded while the batting pair of Shamarh Brooks and John Campbell have been recalled.

On England’s last tour of the Caribbean three years ago, an underrated West Indies stunned them to come away with a 2-1 series win, and Simmons said it was again important for the hosts to play to the high standards they are capable of.

“It’s a case of looking to play the cricket we know will put us in a position to win the series,” he pointed out.

“The series is important for this cricket team and for us as a unit in the way how we play the cricket and to win the series. This is the first Test series of the year and we want to start the year on a strong note, so it’s very important for that.”

As usual, West Indies’ batting will come firmly under the microscope. In Sri Lanka last December they twice failed to pass 200 and managed a highest of 253, mirroring their performance against Pakistan in the Caribbean last August.

West Indies were even more ragged against the South Africans last June, failing to pass 165 in any innings and once dipping below 100.

Simmons said the batting issues had been placed on the front burner and had been the subject of the recent preparation camp for the series.

Ex-king to visit Spain ‘periodically,’ but will live abroad