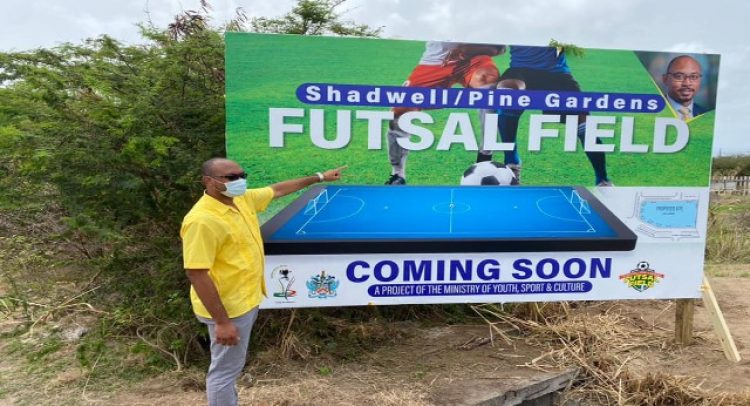 The unveiling was done in the presence of the Permanent Secretary of Sport, Youth & Culture, Valencia Syder and other members of the ministry, including coaches.

The Member of Cabinet, who is also the Parliamentary Representative for Central Basseterre, said that the facility will help to enhance the skills of players, while also providing a much-needed recreational space for the people of Pine Gardens and Shadwell.

The ceremony also heard from Director of Sport, Charles Morton, who explained that “Futsal is the FIFA-recognized form of small-sided football. It is played between two teams, five players on the pitch, at any one time per team, with rolling substitutes and a smaller ball than football, which is harder and less bouncy.”

“Football is a professional sport in its own right with national and international championships and it is a development tool for 11-a-side football,” stated Morton.

The Futsal area will provide an athletic outlet for the Pine Gardens/ Shadwell communities and it will serve as a resource for the district, generally.

Ideally, the Ministry of Sport hopes that this space will serve as a gathering point where residents can learn about physical fitness and sportsmanship, healthy lifestyles, and overall wellness.

It was also disclosed that supporting the Pine Gardens/Shadwell community through the establishment of the facility, signals the Ministry’s genuine interest in seeing the youth succeed, on and off the field of play.

The Minister of Sport also shared that the facility was one of the commitments that he made as a lead-up to his election as Member of Parliament of Central Basseterre and that several other initiatives will soon follow, including additional housing solutions.

Powell is this week celebrating his first year as an elected Member of St. Kitts & Nevis National Assembly.