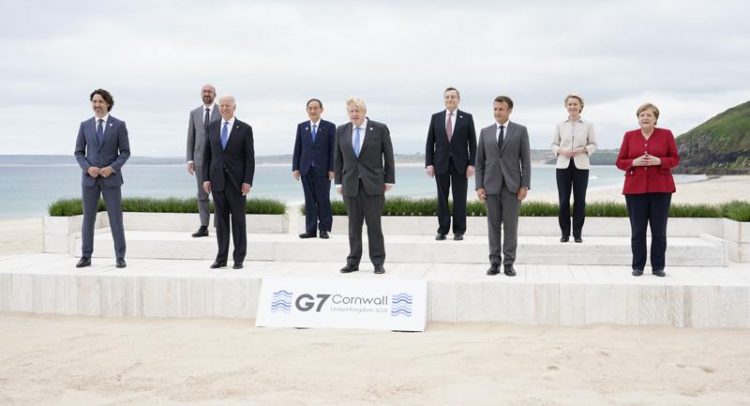 G-7 gathers to pledge 1B coronavirus vaccine shots for world

Recovery from the pandemic was set to dominate their discussions, with members of the wealthy democracies club expected to commit to sharing at least 1 billion vaccine shots with struggling countries. That includes a pledge from U.S. President Joe Biden to share 500 million doses, and a promise from Johnson for another 100 million shots.

Opening three days of talks in Cornwall, in southwest England, Johnson warned that world leaders must not repeat errors made over the past 18 months — or those made in the recovery from the 2008 global financial crisis.

“It is vital that we don’t repeat the mistake of the last great crisis, the last great economic recession in 2008, when the recovery was not uniform across all parts of society,” he said after leaders posed for a formal “family photo” by the sea.

“And I think what’s gone wrong with this pandemic, and what risks being a lasting scar, is that I think the inequalities may be entrenched,” Johnson added.

Earlier, Biden said: “We’re going to help lead the world out of this pandemic working alongside our global partners.”

The leaders of the G-7 — which also includes Canada, France, Germany, Italy and Japan — hope the meeting at the resort will also energize the global economy. Despite the moody skies, the group walked away from the photo as cheerful as children who had just built a sand castle. Led by Johnson, French President Emmanuel Macron threw his arm around Biden’s shoulder. Talks were animated but inaudible.

On Friday, they are set to formally embrace a global minimum tax of at least 15% on multinational corporations, following an agreement reached a week ago by their finance ministers. The minimum is meant to stop companies from using tax havens to shift profits and avoid taxes.

It represents a potential win for the Biden administration, which has proposed a global minimum tax as a way to pay for infrastructure projects. The idea also creates an alternative that could remove some European countries’ digital services taxes that largely hit U.S. tech firms. But the endorsement from the G-7 is just one step in the process. The hope is to get many more countries to sign on — a fraught proposal in nations whose economies are based on attracting business with low corporate taxes.

For Johnson, the first G-7 summit in two years — last year’s was scuttled by the pandemic — is a chance to set out his vision of a post-Brexit “global Britain” as a mid-sized country with an outsized role in international problem-solving.

It’s also an opportunity to underscore the U.K-U.S. bond, an alliance often called the “special relationship” — but that Johnson said he prefers to call the “indestructible relationship.”

Climate change is also a top issue on the agenda, and hundreds of protesters gathered in Cornwall to urge the leaders to act. Demonstrators deployed a barge off the coast with two large inflatable figures depicting Biden and Johnson on board. At another protest, demonstrators carried flags that read “G7 drowning in promises” and “Action not words.”

Official summit business kicked off Friday, with the customary formal greeting and a socially distanced group photo. Later the leaders will meet Queen Elizabeth II and other senior royals at the Eden Project, a lush, domed eco-tourism site built in a former quarry.

The G-7 leaders have faced mounting pressure to outline their global vaccine-sharing plans, especially as inequities in supply around the world have become more pronounced. In the U.S., there is a large vaccine stockpile, and the demand for shots has dropped precipitously in recent weeks.

Biden said the U.S. will donate 500 million COVID-19 vaccine doses. That commitment was on top of 80 million doses Biden has already pledged to donate by the end of June.

Johnson said the first 5 million U.K. doses would be shared in the coming weeks, with the remainder coming over the next year. He said he expected the G-7 to commit to 1 billion doses in all.

German Chancellor Angela Merkel said she hoped the summit would show the world “we’re not just thinking of ourselves.” Macron said France would share at least 30 million doses globally by year’s end. Germany is planning to donate the same amount.

The U.S. commitment is to buy and donate 500 million Pfizer doses for distribution through the global COVAX alliance to 92 lower-income countries and the African Union.

Biden said the U.S.-manufactured doses will be shipped starting in August, with the goal of distributing 200 million by the end of the year. The remaining 300 million doses would be shipped in the first half of 2022. A price tag for the doses was not released, but the U.S. is now set to be COVAX’s largest vaccine donor in addition to its single largest funder with a $4 billion commitment.

“If we have a stop-start supply or if we store all the supply up for the end of the year, it’s very hard for low-income countries with quite fragile health care systems to then really be able to get those vaccines off the tarmac and into the arms of health care workers,” said Lily Caprani, the head of COVID-19 vaccine advocacy at UNICEF.

The COVAX vaccination campaign got off to a slow start, as richer nations locked up billions of doses through contracts directly with drug manufacturers. The alliance has distributed just 81 million doses globally and parts of the world, particularly in Africa, remain vaccine deserts.

So far, among the G-7 countries, only France has begun shipping vaccines through COVAX, according one of the initiative’s leaders, vaccine alliance Gavi. France has delivered 628,800 doses to seven African countries — with Senegal, a former French colony, receiving about 30% of that total.

Biden said Thursday that some of the 80 million doses the U.S. had previously committed to donating — some of them outside of COVAX — were already shipping. The U.S. has also given a few million vaccines to neighbors Mexico and Canada.

White House officials said the ramped-up distribution program fits a theme Biden plans to hit frequently during his week in Europe: that Western democracies, not authoritarian states, can deliver the most good for the world.

China and Russia have shared their domestically produced vaccines with some needy countries, often with hidden strings attached. U.S. national security adviser Jake Sullivan said Biden wants to show “that democracies are the countries that can best deliver solutions for people everywhere.”

EXPLAINER: What will change under Israel’s new government?