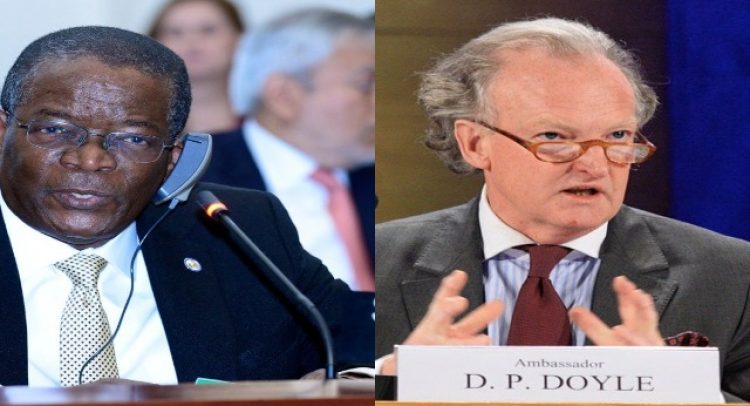 Basseterre, 15th May, 2020, (MyVue News.com) – St. Kitts and Nevis says it wants to be treated more favourably when it comes to financial assistance from the more developed nations, especially those in the so called, G20 economic block.

This was the key message in a letter written to the US publication, the Financial Times, by two of the country’s ambassadors.

Government sources in Basseterre, indicated that ambassadors, Dr. Everson Hull, who is assigned to the OAS, and Dr. David Doyle, who has responsibility for the country’s affairs at UNESCO, in Paris, made the case in the correspondence to the newspaper, that the small islands in the Caribbean, including St. Kitts & Nevis, are very dependent on tourism, which is recognized by the UN World Tourism Organization as a key economic driver and foreign exchange earner.

In fact the Caribbean, is one of the most tourism-dependent regions in the world, they opined.

They have asked the G20 countries to “rethink their financial assistance strategy towards mid-income small island developing states,(SIDS).”

The action by the ambassadors was influenced by an article that appeared in the Financial Times, placing the spotlight on just how dependent these small states are on tourism, and the huge assistance that would be required to offset the losses suffered because of the COVID-19 global pandemic.

The pandemic, since in March this year, forced all Caribbean nations and many other small states worldwide, to close their borders, resulting in a shutdown of their cruise and land-based hospitality sectors.

The cruise ships stopped their daily arrivals, as did the air arrivals and just about every hotel and and ancillary tourist business closed their doors, as new Coronavirus regulations were rolled out to protect the health and safety of citizens.

The letter, which was addressed to the editor of the international publication, highlighted how “many SIDS were deprived of critical revenue streams arising from tourism.”

The Financial Times is said to have quoted  data from an UNCTAD ‘study’ making the argument that Caribbean states like Jamaica, Barbados, St. Lucia and Antigua, all needing financial assistance to recover.

While others have argued that some countries may have to turn to the IMF or other bodies to help their recovery, St. Kitts and Nevis has been profiling its fiscal prudence as a measure to suggest its desire, at this time, to principally find local means to address immediate needs to revive tourism and the economy generally.

The Government has already announced its 120 million EC Dollar stimulus package and prime minister Timothy Harris also made known, in a recent interview with a UK media outlet, that a paradigm shift is to be expected in tourism.

With the Caribbean, just days away before the official start of the 2020 Hurricane Season, the two ambassadors were careful to point out that there are also potential risks to the SIDS and regions like the Caribbean, due to the possible devastating effects of natural disasters, driven by climate change.

This, they posit, only heightens their vulnerability.

The ambassadors are quoted in a Government release as saying, “We applaud G20 countries’ recent decision to freeze official loan payments from low-income countries until the end of 2020 in the face of Covid-19…but we urge the G20 to target assistance more flexibly in exploring mid-income country-by-country specific solutions, considering existing debt burdens and the broader vulnerability factors, in funding the small islands’ development plans, and thereby contribute to their Sustainable Development Goals”.

The bottom-line, continued the release, was that “Mid-income SIDS are just as vulnerable as low-income countries to the Covid-19 pandemic in sustaining their economic, social, education programmes, as well as tourism, already deprived of Official Development Assistance funding because of their mid-income status”.

St. Kitts & Nevis is considered to be included the Middle Income countries.