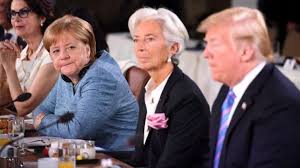 US President Donald Trump has fired off a string of angry tweets criticising America’s closest allies hours after leaving a divisive G7 summit in Canada.

Mr Trump said the US paid “close to the entire cost of Nato” to help protect countries that “rip us off on trade”.

“Fair trade is now to be called fool trade,” he added in response to the threat of new tariffs against the US.

The US actually contributes about a fifth of Nato’s direct funding under a formula based on national income.

However, the 28 Nato members also agree to spend at least 2% of GDP on their own militaries (which assist in Nato missions) however only a handful – including the US and Great Britain – have done so.

German Chancellor Angela Merkel said on TV late on Sunday that his change of heart was “sobering and a little depressing”. The French presidency had earlier condemned “fits of anger”.

After Mr Trump had left the summit in Quebec he rounded on Justin Trudeau personally, suggesting the Canadian prime minister was “very dishonest and weak” and “acts hurt when called out”.

During a news conference Mr Trudeau had reasserted his opposition to US tariffs on steel and aluminium, and vowed to press ahead with retaliatory moves on 1 July.

FLOW signs on as ‘gold sponsor’ of the St. Kitts Music Festival