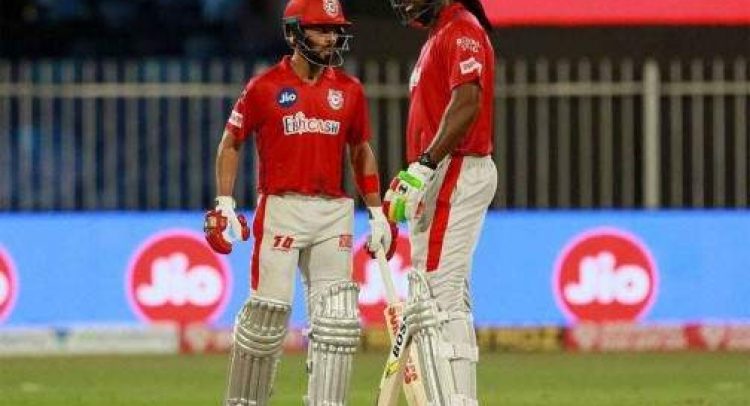 Man of the Match Chris Gayle lashed his second half-century in five outings as Kings XI Punjab continued their surge with a dominant, eight-wicket win over Sunil Narine’s Kolkata Knight Riders (KKR) to move into the play-off spots in the Indian Premier League (IPL) here yesterday.

Asked to chase a modest 150 for victory at Sharjah Cricket Stadium, Kings XI overhauled their target with seven balls to spare to notch their fifth-straight win and sixth in 12 this season.

Gayle was at the forefront of the run chase, hitting a sensational 51 from 29 deliveries in partnership with opener Mandeep Singh who stroked an unbeaten 66 from 56 balls.

Together, they posted exactly 100 for the second wicket to lay the platform for victory, after Captain KL Rahul had made 28 from 25 balls in a 47-run opening stand with Mandeep.

Earlier, opener Shubman Gill had top-scored with 57 off 45 balls as KKR, without West Indies all-rounder Andre Russell, gathered 149 for nine off their 20 overs.

Sent in, KKR were slumping at 10 for three in the second over before Gill revived the innings in an 81-run, fourth-wicket partnership with Captain Eoin Morgan who made a fluent 40 from 25 deliveries.

Gill struck three fours and four sixes while the left-handed Morgan belted five fours and a couple of sixes before falling at the halfway stage of the innings.

His dismissal put in train another collapse for KKR as they lost six wickets for 58 runs off the last 61 balls of the innings.

Narine, coming off a half-century in his last outing, made just six batting at number six before playing on to Barbados-born England seamer Chris Jordan who finished with two for 25.

In reply, Rahul struck four fours before falling lbw to leg-spinner Varun Chakravarthy in the eighth over, but his dismissal paved the way for Gayle to launch his assault at number three.

Entering at the end of the eighth over, Gayle was kept quiet at first by Narine but got stuck into Varun in the 10th, smashing him for two sixes in three balls — the first over long-on and the second over long-off.

In the next over from Narine, Gayle smashed his Windies teammate over long-on for his third six and repeated the stroke with the same outcome in the 13th over from the embattled off-spinner whose four overs cost 27 runs.

Gayle reached his 84th half-century in T20s in the 17th over when he top-edged fast bowler Lockie Ferguson for four and punched the next delivery for a six over long off, before jogging a single.

He perished in the penultimate over with victory already assured, caught at short third man off a slower ball from Ferguson.