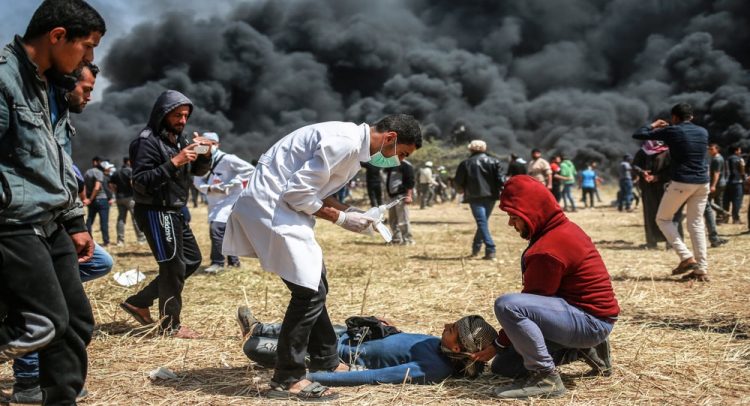 Gaza protests: All the latest updates

For a second week, thousands of Palestinians are protesting along the eastern borders of the Gaza Strip, as part of the Great March of Return movement.

Israeli forces have killed 25 Palestinians during the past week, including 17 on the first Friday of protest, and wounded more than 1,600 others.

Here are all the latest updates on Friday’s protests:

Hosam Salem, a photographer at the scene in the southern Gaza Strip, told Al Jazeera that there are currently 28 protesters in the intensive care unit at the Nasser Hospital in Khan Yunis.

Salem witnessed his colleague Yaser Murtaja, a 30-year-old journalist with a local media outlet, drop to the ground after he was shot by Israeli forces in the stomach.

“Yaser was filming with his camera next to me when we heard the sound of gunfire,” Salem said. “He just fell on the ground and said, ‘I’ve been shot, I’ve been shot’.”

“He needed 10 units of blood,” Salem continued. “The hospital moved him from the operations room to the ICU where his situation remains critical.”

Another journalist, Ibrahim Zanoun, was shot in the arm while covering the protests in Jabaliya, nothern Gaza.