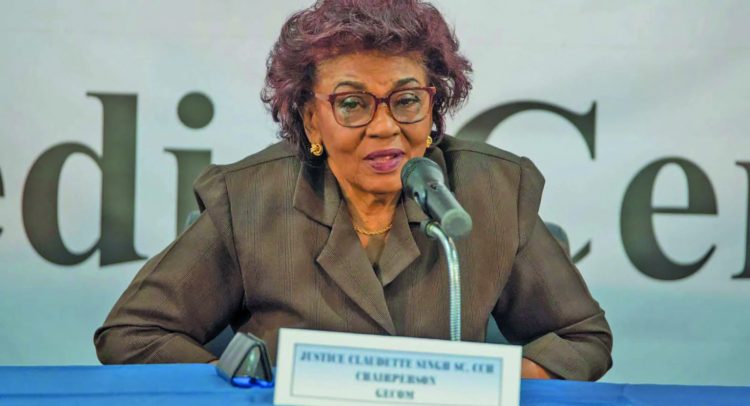 Outlining that the Chief Elections Officer is subjected to the “direction and control” of the Guyana Elections Commission (GECOM), Chairwoman Justice Claudette Singh has instructed Keith Lowenfield to prepare a final elections report using the certified figures from the National Recount exercise.

In a letter dated July 9, Justice Singh told Lowenfield that: “Section 18 of the Election Laws Act No 15 of 2000 stipulates that you are subject to the direction and control of the Commission.”

She further stated that: “In accordance with this section, and pursuant to article 177 (2) (b) of the Constitution and section 96 of the Representation of the People Act Cap 1:03, you are hereby requested to prepare and submit your report on the March 2, 2020 General and Regional Elections by 2pm on 10th July, 2020, using the valid votes counted in the National Recount as per Certificates of Recount generated therefrom.”

Meeting postponed
The instructions were given on the same day the seven-member Commission was scheduled to meet to discuss the way forward following the ruling handed down by the Caribbean Court of Justice (CCJ) on Wednesday. That meeting was, however, postponed after the three Government-aligned Commissioners requested more time to “study” the judgments of the regional court – in a move that has been described as a delaying tactic employed by the defeated APNU/AFC Coalition.

Opposition-nominated Commissioner Sase Gunraj told Guyana Times that the request for more time is “another dilatory tactic coming from that side of the table of the Commission”.

Gunraj pointed out that “at every step, at every critical juncture of this electoral process and the preparatory period leading up to it, it has always been delayed, delayed, delayed. This is just another example in that process.”

And according to the GECOM Commissioner, this further delay is a matter of grave concern. “Of course, I will be concerned about any further delay because everyone is anxious…and everyone is perhaps very frustrated at all of these attempts to prolong a process that should have been concluded within a matter of days of elections being held on March 2.”

Declaration soon after
Asked by this publication how soon the nation can expect a declaration of the elections results from GECOM, Gunraj indicated that it should happen soon after receiving the final elections report from the CEO.

In fact, he pointed out that the compilation of the report can be done within minutes.

“This should be done in a matter of minutes, hours maximum, because the generation of that report won’t require any high science or complex mathematics. It is the application of a formula for numbers already in the public domain. It should take a matter of minutes,” Gunraj stated.

Regarding a declaration, he highlighted that, in 2015, a declaration was done soon after the CEO had submitted an elections report to the Commission.

As such, Gunraj said Lowenfield’s “failure to comply with lawful instructions of the Commission must be met with consequences.”

Gunraj opted not to say, at this moment, what those consequences could be.
As it stands, private criminal charges have already been filed against Lowenfield over his attempts to commit electoral fraud. A summons has been issued for him to appear in court on July 24.

Meanwhile, Lowenfield’s elections report to be submitted tomorrow must include the certified recount results which show that the Peoples Progressive Party Civic (PPP/C) won the elections with 233,336 votes.

In fact, the CCJ ruling made it clear that this is what the GECOM CEO must now do, after it had invalidated the last report he submitted, wherein he arbitrarily invalidated over 115,000 voters to give the incumbent APNU/AFC a false victory.

Holder takes six as England slump to 204 all out