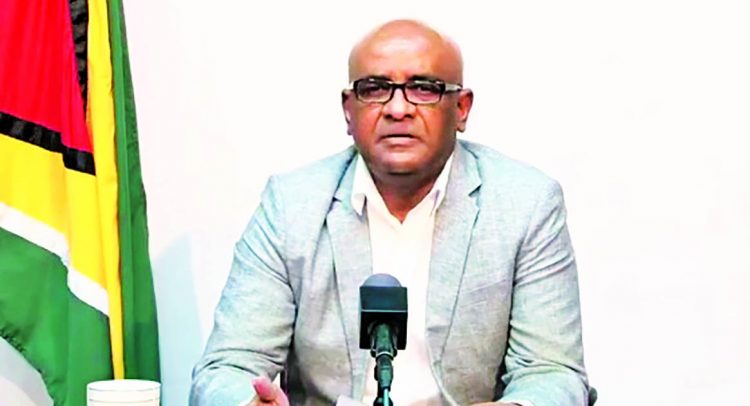 GECOM has no power to annul elections – Jagdeo

Calls have been mounting, mostly from the incumbent A Partnership for National Unity/Alliance for Change (APNU/AFC) Coalition and their supporters, for the contentious March 2020 elections to be annulled and for fresh elections to be called.

However, Jagdeo, whose Opposition People’s Progressive Party/Civic (PPP/C) has emerged with a landslide victory over its main political rival, APNU/AFC, stated on Friday that the Constitution does not invest such powers in the electoral body to cancel an election.

“There is no provision in our Constitution or any law that states GECOM has authority to void an election, annul it, or call for fresh elections. There’s absolutely no law that gives GECOM that power,” he contended.

The Opposition Leader further pointed out that the results of the recently concluded national recount of the votes cast on polling day have been certified in all 10 electoral districts in Guyana, and as such, there is no room now for the Elections Commission to do anything other than make a declaration of the General and Regional Elections that were held more than three months ago.

According to Jagdeo, a former Head of State who is also the General Secretary of the Opposition PPP/C, the Constitution does not provide for a situation where there are certified elections results but no declaration is made.

“So GECOM doesn’t have any authority vested in them by any law in this country or the Constitution to not declare a winner or the President or the list [of Candidates] that won the most votes. We already have certified results. So, they’re bound to declare on the basis of certified results,” he asserted.

In fact, this same position was shared by former Speaker of the National Assembly, Ralph Ramkarran, recently. During an engagement with media operatives on the sidelines of the National Recount on May 24, Ramkarran reaffirmed that the Constitution does not provide for a situation wherein no declaration is made after an election.

“If there are no results declared, then that process cannot move forward; and there is not provisions to go backwards either, because Parliament is already dissolved and cannot be recalled… We [will be] in what I call a ‘constitutional dead end’ or a ‘constitutional no man’s land’ … So, it’s not possible for GECOM not to give a result or make a declaration,” Ramkarran, who is also the Presidential Candidate of A New and Unity Guyana (ANUG), explained.

Jagdeo’s attempt to quell concerns about the elections results comes on the heels of Chief Elections Officer (CEO) Keith Lowenfield being scheduled to hand over his report on the National Recount to the seven-member Elections Commission today, for deliberation before a final declaration is made on June 16.

The National Recount of the votes cast at the March 2 elections concluded on Tuesday following the certification of the results for contentious Region Four (Demerara-Mahaica) – the country’s largest voting District.
The results from the exercise, which are now in possession of GECOM, the observers, the political parties and shared publicly, show the PPP/C with a total of 233,336 votes – a difference of 15,416 over the incumbent APNU/AFC.

However, in attempts which have been labelled as desperate by many, the Coalition has been making numerous unsubstantiated allegations to discredit the process. These include claims that dead or migrated persons voted at the March 2 polls.

Despite those claims being refuted by dozens of persons who have come forward to prove that they were in fact in Guyana and voted on March 2 themselves, the incumbent party wants GECOM to probe these allegations before making a declaration.

However, many, including legal stalwarts, have argued that GECOM is not an investigative body, and cannot probe any claims. In fact, in a situation where a probe is desired, provisions are made for recourse via an elections petition, to be filed in the High Court after the swearing in of the new President.

To this end, the PPP/C General Secretary posited that his party expects that Lowenfield’s report will be consistent with the mandate set out in the gazetted Recount Order, which states that the CEO shall tabulate the figures from the recount of the 10 electoral districts and submit this to the Commission in a report along with a summary of the observation reports from all the regions.

“We expect that Mr Lowenfield will complete his report (and) his report will be consistent with what the order says. He will not attempt – even though I’m sure that there must be intense pressure on him – to interject in the report subjective views and APNU’s propaganda… The order says a summary of the observation reports. Summary doesn’t mean that he has power to investigate. It’s a passive reporting relation in his report…
“I want to urge people to be patient a few days more, but be watchful. Watch out for Lowenfield’s report, to see if he and the staff of GECOM will continue to maintain the new level of professionalism that we saw in (the) recount,” Jagdeo posited.

Further, Jagdeo contended that if there is any departure from professionalism, there will be consequences.

Upon receiving the report from the CEO today, the Elections Commission will have another three days, according to the Recount Order, to deliberate before finally making a declaration of the elections results on June 16.
The PPP/C has contended that from the time results from the 10 Regions were certified and the results were available — in this case, showing a PPP/C victory – the party’s Presidential Candidate Irfaan Ali immediately became the President-elect.

However, the party is now awaiting the formal declaration by GECOM before Ali’s inauguration can be done. According to Jagdeo on Friday, “This is critical for us, because there are so many things for us to address.”