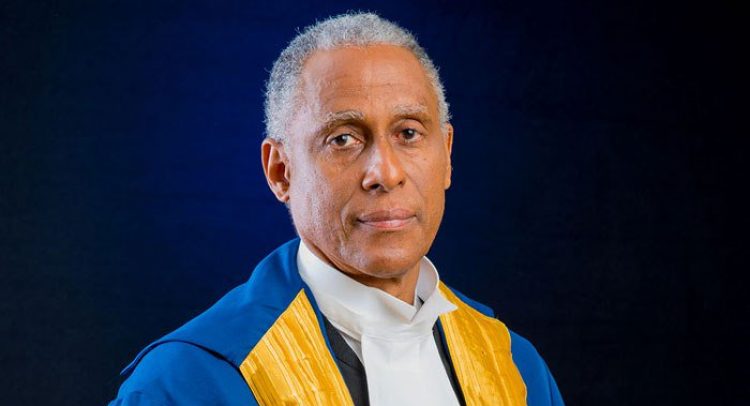 The Caribbean Court of Justice (CCJ) on Thursday made it clear that its order restraining the Guyana Elections Commission (GECOM) from taking any steps to prejudice the fair hearing of the appeal filed by the People’s Progressive Party/Civic (PPP/C) remains in effect until the hearing and determination of the matter.

This was reaffirmed by CCJ President, Justice Adrian Saunders during the virtual case management hearing on Thursday.

PPP/C’s Presidential Candidate, Dr Irfaan Ali and PPP General Secretary Bharrat Jagdeo, through a battery of lawyers led by Senior Counsel Douglas Mendes and including Attorneys Anil Nandlall, Devindra Kissoon and Sanjeev Datadin among others, had approached the Trinidad-based regional court on Tuesday for special leave to challenge a decision of Guyana’s Court of Appeal, which asserted jurisdiction and ruled in the Eslyn David matter on Monday that “more votes cast” means “more valid votes cast” in the context of the recount order.

The PPP/C is contending that the Appeal Court’s pronouncements have “plunged the law in total confusion and it is now no longer clear how an election of members of the National Assembly is to be challenged and how the election of the President can be challenged”.

To this end, the Party secured an order from the CCJ on Tuesday restraining GECOM and its officers from taking any steps to prejudice the fair hearing of the matter, including but not limited to issuing a declaration of the results from the March 2 elections.

As such, Justice Saunders reminded the various parties on Thursday that the court order would remain in effect until the matter was determined.
“The order that was given on [Tuesday] that the status quo is to be maintained until the court gives its decision in this matter. We will naturally endeavour to give our decision in as timelier a manner as is possible, but until we do so, the status quo is to remain as it is on the ground,” the CCJ President reaffirmed.

During Thursday’s case management conference, the Court established timelines for the various parties to make their submissions ahead of a marathon hearing set for next Wednesday, July 1, 2020 commencing at 09:00h.

Among the respondents in the case are: A Partnership for National Unity/Alliance For Change (APNU/AFC) supporter Eslyn David, who is represented by a legal team led by Senior Counsel John Jeremie; Chief Elections Officer Keith Lowenfield; GECOM Chair, Retired Justice Claudette Singh, represented by Attorney-at-Law Kim Kyte-Thomas; Attorney General Basil Williams, who appeared in person, and representatives from the newer political parties – the joinder parties (A New and United Guyana, Liberty and Justice Party and The New Movement) represented by Senior Counsel Ralph Ramkarran as well as Change Guyana and The Citizen Initiative, represented by Attorney Kashir Khan – that contested the March 2 polls.

At Thursday’s session, the CCJ added the APNU/AFC and the United Republican Party as interested parties in the case.

Lowenfield’s absence
Notably, however, CEO Lowenfield was unrepresented in the proceedings on Thursday as was the case during the Appeal Court matter last week.
In fact, SC Mendes indicated to the CCJ panel that steps were taken to notify the CEO of the proceedings.

“We have ensured that the Chief Elections Officer has been served with all of the papers in these proceedings, including the orders of this Court… in particular the case management order. We reminded him up until this morning, that this case management was on and we’ve also ensured that the link for these proceedings were sent to him so that he’d be able to attend. So, everything has been done to ensure that he’d be here, and, therefore, it is surprising that he’s not,” Mendes stated.

Lowenfield on Tuesday morning presented his final elections report to GECOM, in which he invalidated some 115,000 votes.

The GECOM Chair had instructed the CEO to submit his filed report based on the figures emanating from the national recount, which show the PPP/C in a landslide victory with over 15,000 votes more than the caretaker APNU/AFC coalition.

However, before Lowenfield submitted his report last week, he was served with the Eslyn David Notice of Motion. After the Appeal Court’s ruling on Monday, the CEO went ahead and submitted his report to GECOM disenfranchising more than 115,000 voters. This was despite the Court of Appeal staying its judgement for three days.

But AG Williams was quick to defend Lowenfield’s action in court, telling the panel that there was confusion, because the coercive orders sought by David in the Appeal Court to restrain the CEO from submitting his report were not granted, he believed that he could go ahead with submitting his report.

“I suspect that before your order came out, the CEO had no impediments there. So that’s why he felt that he could’ve acted, and they’ve done nothing since,” Williams told the Court.

On the contrary, however, SC Mendes told the CCJ panel that Lowenfield was present during the Appeal Court’s ruling on Monday when it stayed its ruling. Yet, by the following day, he was able to “find his way to invalidating 115,000 votes. I was hoping that he (Lowenfield) would be here today, so that in the event that what he did, as the Attorney General is suggesting, was simply an error, a mistake of some sort, that he would tell the court that he would be withdrawing his report…”

Nevertheless, the requests for the CCJ panel to intervene and have Lowenfield withdraw his report was not granted by the Court on Thursday, which contended that the CEO’s submission of the report was done prior to its order issued late Tuesday afternoon.

“We cannot undo what was done by the Chief Elections Officer,” Justice Saunders posited, urging the parties that they could address this matter in their submissions.

Meanwhile, the Court also clarified that it was yet to ascertain its jurisdiction in the matter, telling the parties that this preliminary aspect of the case would be consolidated with the substantive hearing. This, according to the CCJ President, was in the interest of time and the urgency of the matter.

Moreover, the CCJ President went on to assure the parties that the Court would treat this matter based only on what was presented to it by the parties – as it has always done. This assurance was made after concerns were raised by SC Jeremie about statements being made by persons with “considerable influence in the Region” on the matter.

“You can rest assured that we are not going to have regard to anything that which is being said outside the court and which is not being featured as a relevant part of these proceedings,” Justice Saunders stressed.

This was according to former Attorney General Anil Nandlall, who made reference to Justice Saunders’ statement on the submission of Chief Elections Officer Lowenfield’s recent report to the GECOM.

“It is clear that the Judge was implying that the issue regarding the Chief Elections Officer may be dealt with at the hearing but not at the case management stage of the case, that is, at Thursday’s hearing,” Nandlall stated.

Confirmed new virus cases hit a new high in US