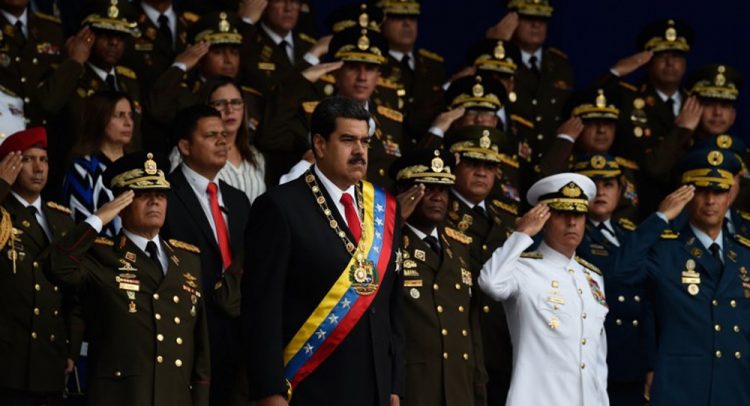 General and colonel among 14 arrested over Maduro ‘attack’ Two high-ranking military officers were among 14 people arrested so far during investigations into an alleged drone attack against President Nicolas Maduro.

The arrests of Major-General Alejandro Perez and Colonel Pedro Zambrano from the National Guard increased suspicions of discontent within the armed services, whose support is considered essential to the unpopular president maintaining his grip on power.

The Supreme Court released a statement on Tuesday saying Perez and Zambrano, along with opposition politician Juan Requesens and five others had been detained “for attempted aggravated homicide against the president”.

On August 4, a drone loaded with explosives detonated near a military event where the embattled leader was giving a speech. He was unharmed but has described the incident as an “assassination attempt”.

Fourteen people have so far been arrested and charged in connection with the incident, which opposition figures say Maduro is using to step up repression and persecution of the opposition.

Two of the detained, Zambrano and Juan Monasterios, a retired soldier, were also charged in connection with an assault on a military base in August last year in which weapons were stolen.

“The conflict today is within the government – not just at the political level, but more importantly within the armed forces,” he told The Associated Press from Bogota, Colombia.

“Maduro is facing a divorce with the armed forces. That’s opened a road which is irreversible”.

Borges has been living in the Colombian capital since fleeing Venezuela with his family in August following the breakdown of negotiations with the government.

Both he and Requesens have been stripped of their parliamentary immunity by the Constituent Assembly, a powerful pro-Maduro legislative body created last year to assume the powers of the opposition-controlled National Assembly.

Maduro has accused the former National Assembly leader of masterminding the drone incident, calling him “an assassin” on state television. The president has also accused Colombia and unidentified individuals in the United States of involvement.

Venezuelan officials have requested Borges’ extradition and asked Interpol to arrest him.

Venezuela is enduring ongoing economic, social and political crises, with the International Monetary Fund forecasting inflation will reach one million percent this year.

Many Venezuelans are choosing to leave their country to escape widespread shortages of basic items, including food and medicine.

According to the United Nations, an estimated 2.3 million Venezuelans have fled as of June, mainly travelling to Colombia, Ecuador, Peru and Brazil.

Turkey doubles tariffs on some US goods amid rising tensions