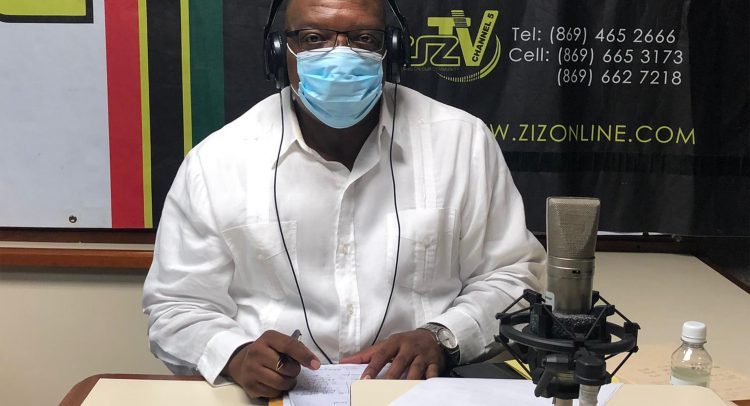 While the National Assembly was dissolved on Tuesday May 12, the Federation’s Constitution stipulates that general elections are to be held within ninety days of the dissolution. During that period government has to function to ensure order and good governing, and as a result it remains intact.

According to Prime Minister Dr the Hon Timothy Harris, he advised His Excellency the Governor General, Sir S.W. Tapley Seaton, to dissolve the National Assembly as from Tuesday, the 12th May, 2020, and the Governor General graciously consented to doing so, and that a proclamation to that effect has already been gazetted.

“Our Constitution, our democracy and rule of law is something that we can all be proud of,” said Dr Harris on Thursday evening, May 14, when he appeared as a special guest on Straight Talk radio talk show hosted by the Minister of Public Infrastructure the Hon Ian Patches Liburd on ZIZ Radio.

The Prime Minister added: “It is a shining light that we should cherish, and indeed our Constitution made it clear that every parliament shall continue for five years, from the date of the first sitting of the National Assembly after an election and shall then end unless sooner dissolved. So the dissolution took place on the 12th of May and that now means that we have a ninety-day period within which general elections should be held.”

What is happening, he commented, reinforces the commitment of the Team Unity Government to the democratic life which stands in contrast to the period before 2015 when a Motion of No Confidence was held in abeyance, and could not make it on the Order Paper for some twenty-six months.

“We came to office pledging our commitment to the good governance agenda and brought in democracy, and certainly we did that,” said Dr Harris. “We also ensured that by preserving our democratic lives, and showing outmost respect for the best in the Westminster tradition of democracy that our people could be proud. We are blessed to have liberties that allow us to choose our own party in life, to choose our own government, and to choose what kind of nation we would want to be.”

Following the ending of the parliamentary term, the Prime Minister noted, it is now an ideal time for the people to reflect on the many and vast accomplishments of the government that have been inspiring to the broad cross-section of persons in St. Kitts and Nevis. He noted that the people now accept that the Team Unity Government has put St. Kitts and Nevis on the right path.

The Prime Minister observed that the Executive is one of the three arms of governance, the others being the Judiciary and Parliament. According to the Constitution, the Executive remains intact even when the Parliament is dissolved – until an election is called and appointments are made to new persons in the particular field.

“The official position of persons remains intact until their appointments are revoked,” advised Dr Harris. “That revocation usually comes once the results are in and the person who commands the support of the majority of representatives gets sworn in, asks the Governor General to make new appointments.”

Photo: Prime Minister Dr the Hon Timothy Harris when he appeared as a special guest on the Straight Talk show on ZIZ Radio, hosted by the Hon Ian Patches Liburd.

High Court resumes operations on 18th May, says Permanent Secretary in the Ministry of Justice and Legal Affairs