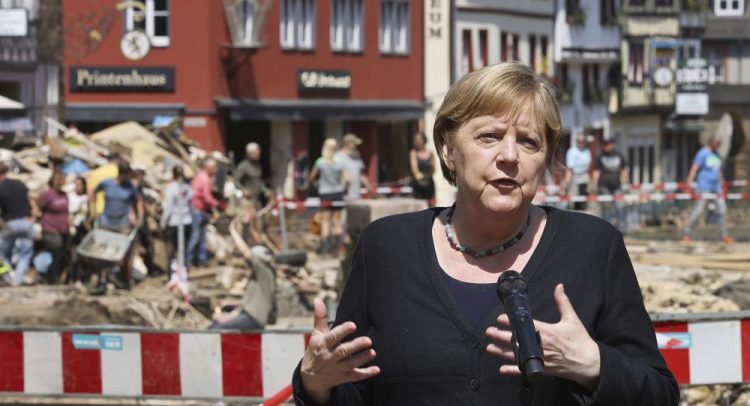 BERLIN (AP) — Germany’s Cabinet on Wednesday approved a roughly 400 million-euro ($472 million) package of immediate aid for flood victims and vowed to start quickly on rebuilding devastated areas, a task that is expected to cost well into the billions.

Finance Minister Olaf Scholz said the package, financed half by the federal government and half by Germany’s state governments, to help people deal with the immediate aftermath of last week’s flooding would increase, if more money is needed.

“We will do what is necessary to help everyone as quickly as possible,” Scholz said.

At least 171 people were killed in Germany, well over half of them in Ahrweiler county, near Bonn. when small rivers swelled quickly into raging torrents on Wednesday and Thursday following persistent downpour. Another 31 died in neighboring Belgium, bringing the death toll from floods in both countries to 202.

The deluges also destroyed or severely damaged homes. Authorities in Germany’s two affected states are responsible for details of who receives how much aid and how, but Scholz said they have indicated it will be “a very unbureaucratic process” that involves no means-testing.

“It’s necessary to send a message quickly that there is a future, that we are taking care of it together, that this is a matter for us as the whole country to help with,” he added.

Germany has recent experience with major floods that hit swaths of the country, particularly the east, in 2002 and 2013. They caused extensive and costly damage. However, the death tolls were particularly high in last week’s floods, which were the worst in living memory in the areas they hit.

Scholz said the government aid for rebuilding after the 2013 floods has totaled around 6 billion euros ($7 billion) so far and more aid might be required this time.

“There is nothing we need to delay,” he told reporters in Berlin. “The pledge we want to give now is that this help with rebuilding can begin straight away…so that everything necessary can be done to restore infrastructure, damaged houses, damaged schools, hospitals, put in order anything that was destroyed there.”

German Chancellor Angela Merkel said during a visit to a badly damaged town on Tuesday that she hopes getting money to people “is a question of days.”

Interior Minister Horst Seehofer said he hopes for a rough assessment of the damage by the end of the month, after which federal officials and state governors will have to meet to discuss the way forward.

He and Scholz indicated that people can expect reconstruction aid whether or not they were insured for “elementary damage” from events such as floods, which many in Germany are not, though insurance likely will be taken into account in determining details. Merkel has expressed skepticism about making such insurance obligatory, arguing that it could produce unaffordable premiums, but some other German officials advocate it.

Seehofer said there will have to be “a broad debate about safeguard systems” for the future given that natural disasters are likely to become more frequent and more destructive.

Scholz concurred, adding: “in terms of what’s going on now, we have to help. I would argue against being cynical and being heartless. This is a big disaster, we have to help and that has to be the first priority, rather than any principles.”

The head of an organization representing German insurance companies said it expects insured damage to total 4 billion to 5 billion euros ($4.7 to 5.9 billion) in the two German states that suffered the worst damage.

It will likely exceed the damage of 4.65 billion euros caused by flooding in 2002 that submerged parts of Dresden and other eastern German areas, German Insurance Association chief executive Joerg Asmussen said. That, he added, makes what happened last week “one of the most devastating storms of the recent past.”