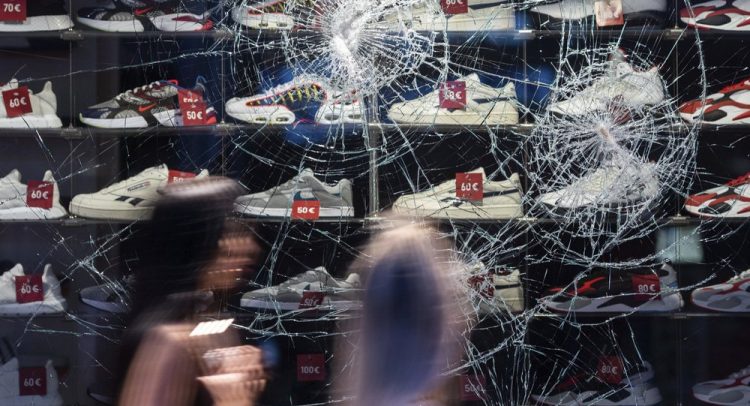 German Chancellor Angela Merkel and the country’s top security official on Monday decried an outburst of violence at the weekend in the southwestern city of Stuttgart, where hundreds of people attacked stores, vehicles and police officers following a stop-and-search for drugs.

Merkel’s spokesman said the scenes “were abhorrent and must be strongly condemned.”

“Anyone who takes part in such outbreaks of violence, brutally attacks police officers and destroys and plunders shops cannot in any way justify it,” Steffen Seibert said Monday.

Seibert thanked police officers nationwide, saying they “should know that the German government and millions of people stand behind you.”

Interior Minister Horst Seehofer, who called for “swift and tough” punishment of those responsible, said there had been a broader rise in violence against officers and rescue workers for some time. He complained of “disparagement of the police through words, and disparagement can be just as hurtful as physical violence.”

Seehofer also suggested he might file a criminal complaint against a left-wing newspaper columnist who had written disparagingly about police recently, but his spokesman later said officials were still examining the legal implications of such a move. Opposition lawmakers warned that government intervention over a newspaper column could be seen as interference in press freedom.

The disturbances started after officers stopped a 17-year-old on suspicion of drug possession as several hundred people partied outside around 11:30 p.m. Saturday, police said. Bystanders started throwing stones and bottles, and smaller groups ran through surrounding streets breaking shop windows, according to police.

Police said 40 businesses were vandalized, nine of them were looted and 12 police vehicles were damaged before officers brought the situation under control.

Police have said the violence had no apparent political motivation. They said the suspect initially stopped was a white German citizen. Of the two dozen people arrested, half held German passports and half were citizens of other countries.

Authorities said one of those arrested has been ordered held pending possible charges and they were seeking formal warrants to keep in custody another seven — citizens of Germany, Croatia, Iraq, Portugal and Latvia. They include a 16-year-old boy accused of attempted manslaughter after allegedly kicking in the head a student who had been beaten up after criticizing the unrest.

Other people detained during the unrest were released.

Photo: People walk past cracks in a damaged window of a retail store during a clash in Stuttgart, Germany, Sunday, June 21, 2020. Police in Stuttgart say a check for drugs sparked attacks on officers and vandalism of downtown store fronts. They said the disturbance started after officers stopped a 17-year-old on suspicion of drug possession as several hundred people partied outside late Saturday. (Marijan Murat/dpa via AP)