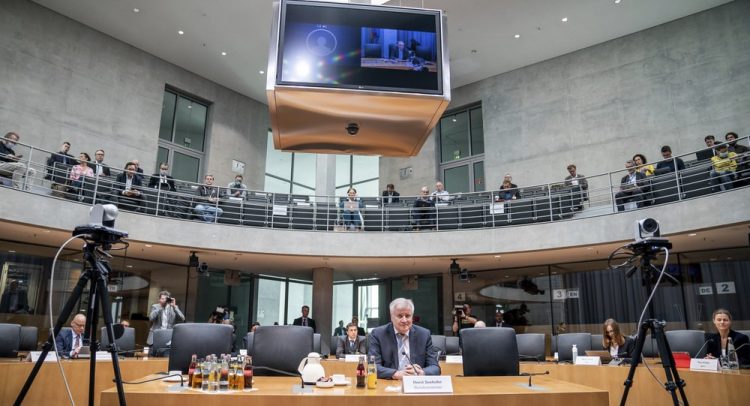 BERLIN (AP) — Germany said Thursday it is seeking EU sanctions against a Russian man over his alleged role in the hacking of the German parliament at a time when evidence shows he was working for Russian intelligence.

Germany’s Foreign Ministry said it called in Russian ambassador Sergei Nechayev to inform him in person of the move.

Senior German diplomat Miguel Berger “strongly condemned the attack on Germany’s parliament in the name of the German government” while meeting with Nechayev, the ministry said.

Berger told Nechayev that Germany would be pursuing EU sanctions against Russian citizen Dmitriy Badin, and possibly others, under a new regime established last year to respond to cyberattacks, the ministry said.

He referred to a warrant issued May 5 by federal German prosecutors for Badin, an alleged officer with Russia’s GRU military intelligence agency. Badin was already being sought by U.S. authorities and is believed to be part of the hacker group known as APT28, or Fancy Bear.

German prosecutors allege that Badin, “acting jointly with other persons not yet identified,” had “undertaken an intelligence operation against Germany for the intelligence service of a foreign power,” the ministry said.

“The accused is suspected of being responsible for the hacker attack on the German parliament in April/May 2015 as a member of the APT28 group,” the ministry said. “There is reliable evidence that he was a member of the GRU military intelligence agency at the time of the attack.”

The Russian Foreign Ministry did not immediately respond to a request for comment.

Chancellor Angela Merkel said earlier this month there was “hard evidence” that correspondence from her parliamentary office was among the documents targeted in the attack.

Russian officials have repeatedly denied any involvement by Moscow in the 2015 hacking attack on the German parliament, calling the German accusations groundless. They have similarly dismissed charges of Russian meddling in the 2016 U.S. presidential election and alleged cyberattacks on other Western nations and institutions.

Diplomatic ties between Germany and Russia are already tense, following the brazen killing of a Georgian man on the streets of Berlin last year. Prosecutors have suggested the hit was ordered either by Moscow or authorities in the Russian republic of Chechnya.

Russian national Vadim Sokolov was arrested near the scene and is accused of carrying out the killing with official help. The case has already led to tit-for-tat expulsions of diplomats from Berlin and Moscow.

Noting the ongoing investigation of the slaying, the Foreign Ministry said Thursday it “reserves the right to take further measures” beyond the sanctions against Badin.

Photo: Federal Minister of the Interior for Building and Homeland Affairs, Horst Seehofer, waits to be questioned as a witness in the Bundestag’s Toll Inquiry Committee. The committee of inquiry is looking into the circumstances surrounding the failure of the car toll after it was found that the toll was not in conformity with European law. (Michael Kappeler/dpa via AP)

Bunny Wailer Anxious As Life Partner Missing - Together For 50 Years