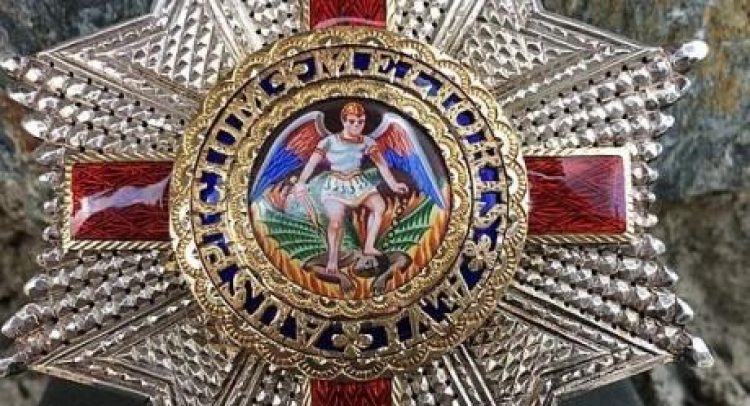 The campaign of the Black Lives Matter movement against racism reverberated in King’s House yesterday as Governor General Sir Patrick Allen accepted as “offensive” a racist image on a British badge he is forced to wear on his breast on official duties.

Since Independence, Jamaican governors general have worn the breast star — one of Britain’s highest honours — with an image depicting a white angel standing on the neck of a chained black man, which has become a flashpoint in the protests against racism.

“The governor general acknowledges and welcomes the concerns expressed by our citizens and the negative emotions that the image has caused, and assures his fellow Jamaicans that the necessary requests will be made for a revision of the image to the Lord Chancellor of the Order of St Michael and St George,” said a news release.

Campaigners against the image on the badge representing the Order of St Michael and St George contend that it is akin to the scene of the May 25 killing of black American George Floyd by a white police officer in Minnesota, United States.

Sir Patrick, in an explanatory note, said the 19th century Star of the Order of St Michael and St George, two military saints, depicted St Michael, the Archangel, as being triumphant over Satan.

“However, in light of the heightened scrutiny of our iconography in Jamaica undergirded by our history, the Black Lives Matter movement in America, and related issues in the global sphere, it is evident that the image can be offensive,” he said.

Similar pressure is being mounted on Buckingham Palace to redesign the emblem which is traditionally awarded to ambassadors and diplomats and senior officials of the British Foreign Office who have served abroad.

A petition started by Tracy Reeve calling for the medal to be redesigned has quickly attracted more than 5,000 signatures, many from Jamaicans, on change.org.

“This is a highly offensive image… We the undersigned are calling for this medal to be completely redesigned in a more appropriate way and for an official apology to be given for the offence it has given,” the petition said.

The British Guardian newspaper quoted Bumi Thomas, a Nigerian British singer, activist, and specialist in visual communications, as saying: “It is not a demon; it is a black man in chains with a white, blue-eyed figure standing on his neck.

“It is literally what happened to George Floyd and what has been happening to black people for centuries under the guise of diplomatic missions: Active, subliminal messaging that reinforces the conquest, subjugation and dehumanisation of people of colour.

“…It is the definition of institutional racism that this image is not only permitted but celebrated on one of the country’s highest honours. Whilst statues are being pulled down and relocated, emblems and symbols of this nature also need to be redesigned to reflect a more progressive, holistic relationship between Britain and the Commonwealth nations.”

The Guardian also quoted Sir Simon Woolley, director and one of the founders of Operation Black Vote, which campaigns for greater representation of ethnic minorities in British politics and public life, as saying he was appalled by the badge.

“The original image may have been of St Michael slaying Satan, but the figure has no horns or tail and is clearly a black man. It is a shocking depiction, and it is even more shocking that that image could be presented to ambassadors representing this country abroad,” he said.

Main photo: The Star of the Order of St Michael and St George depicts St. Michael the Archangel as being triumphant over Satan (Jamaica Gleaner)

Prime Minister Harris announces the benefits to the regularisation of S.T.E.P. workers