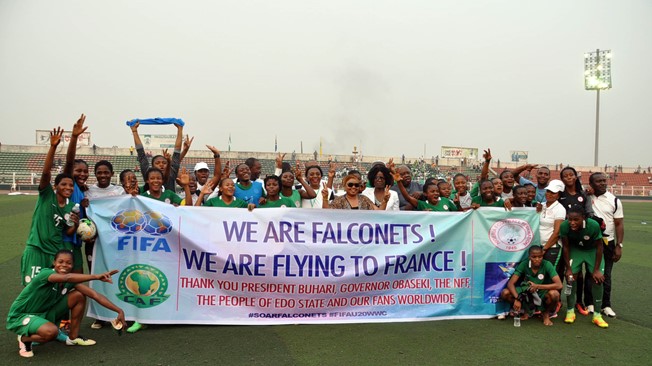 Ghana and Nigeria make it five in a row 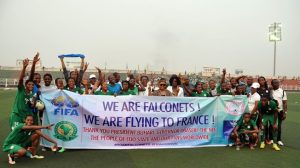 Nigeria and Ghana have continued their habit of qualifying for the FIFA U-20 Women’s World Cup by booking their places at France 2018. The two African heavyweights will be taking part in the world finals in the age group for the fifth time in a row.

In negotiating all the obstacles in their paths, the Super Falconets and Black Princesses each racked up five wins and a draw in their six qualifiers, which began in August 2017. They also conceded just two goals apiece, with the Ghanaians ending the competition as the highest scorers with 24 goals, one more than the Nigerians.

The Ghanaians made a strong start, beating Algeria 10-0 on aggregate before defeating Kenya 10-1 in the next round. In the third and final round, Yussif Basigi’s charges took on Cameroon, playing out a 1-1 draw in the first leg before overcoming the Junior Lionesses 3-0 in the Cape Coast return to secure their place in France.

Nigeria also cruised through the first round, beating Tanzania 9-0 over two legs. Morocco proved a tougher nut to crack in the second round, however, with the Atlas Lionesses holding the Super Falconets to a draw in the first leg before going down 5-1 in the second. South Africa provided the final hurdle to France 2018, one the Nigerians cleared with ease thanks to 2-0 and 6-0 victories.

“I think we performed well in qualifying for France 2018,” said Nigeria coach Christopher Danjuma afterwards. “All the teams we faced made life difficult for us, and every match prepared us for the next one. The tougher the opposition, the tougher our preparations. We had respect for South Africa, but the Nigerian people all got behind us to give us the strength to beat them, just as they did right from the start of the qualifiers. We put a lot of effort into qualifying. We worked hard and it paid off.”

Rising stars
Ghana and Nigeria each had a prolific striker to fire them on their way to France 2018. Nigeria’s standout performer up front was Rasheeddat Ajibade, the leading scorer and most valuable player in the African qualifiers for the FIFA U-17 Women’s World Cup Jordan 2016. Reprising those exploits, Ajibade scored in all six matches, racking up ten goals in the process.

That figure was matched by Black Princesses captain Princella Adubea, despite her missing her side’s opening 5-0 defeat of Algeria. She made up for lost time by helping herself to four goals in the return match against Kenya and eventually joined Ajibade in double figures.

Though neither player managed to find the back of the net in Jordan two years ago, judging by their efforts in the qualifiers, they are not planning on going goalless in France this summer.

The stat
4 – the number of teams who have appeared at every FIFA U-20 Women’s World Cup. Nigeria belong to this very select club, which also includes Brazil, Germany and USA.

Did you know?
To ensure their players had all the support they needed for the second leg of their third and final tie, against Cameroon in Cape Coast on 27 January, the Ghanaian Football Association gave the fans free admission to the stadium. Ghana’s First Lady Rebecca Akufo-Addo was also on hand to address the Black Princesses, who repaid the nation for its support with an emphatic win.