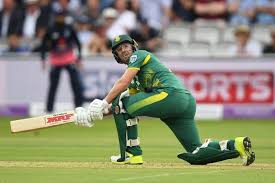 The former West Indies player and head coach said he had discussed the matter with the marquee batsman on the morning before he made the announcement, and his mind seemed already made up.

“The announcement came as a shock to me. We had a conversation when he called me in the morning before he made the announcement,” said Gibson, who took charge of the Proteas last August.

“We had a long conversation and I asked, ‘Are you sure you are doing the right thing?’ He reckoned that he is. He had spoken with people he is close to, people that advise him and he reckons that he is tired.”

He added: “Of course, it is disappointing. He is one of the best players in the world. It would have made a huge difference in the World Cup. He knows that. But he has chosen to walk away at this time, and it is what it is.”

Speculation had surrounded de Villiers’s future in international cricket for some time, especially after he took a two-year break from Tests back in 2016.

His return coincided with series wins against India in January and Australia in March, where he struck a century and six half-centuries in a decent show of form across both tours.

However, Gibson said the former captain’s departure a year out from the World Cup in England and Wales had left a huge void to fill.

“He gave me a year to find an appropriate replacement for him. I don’t believe he can be replaced, but it gives an opportunity for somebody to put their hand up,” said Gibson.

“If I was a young cricketer playing franchise cricket in the country and I see the number four spot open, I would do whatever I can to make this position mine.”

Gibson has had a strong start to his tenure after replacing Russell Domingo as South Africa head coach.

He oversaw Test successes against Bangladesh and Zimbabwe, before following up with victories over India and Australia.

Gibson was controversially sacked as West Indies head coach four years ago, just days prior to the start of Bangladesh’s tour of the Caribbean.