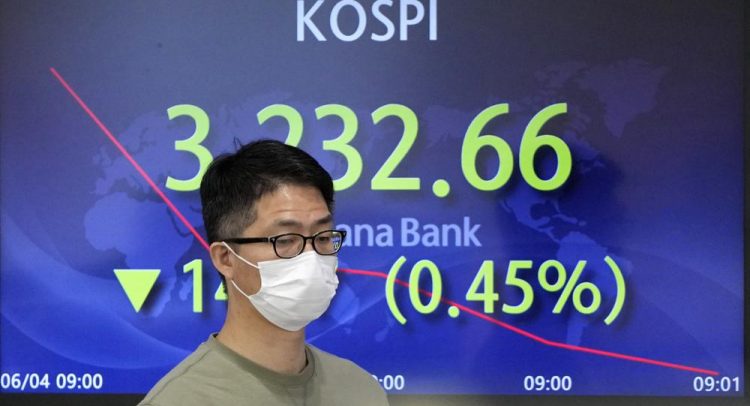 Global shares lower ahead of US monthly jobs report

TOKYO (AP) — Global shares were mostly lower Friday ahead of the release of a U.S. monthly jobs report that is viewed as a bellwether for the recovery from the pandemic.

Markets declined in Europe and Asia and U.S. futures also were marginally lower. On Thursday, Wall Street retreated, dragged lower by a decline in technology shares.

The U.S. jobs report due out Friday could provide more clarity on the economic recovery and the potential for higher inflation. Economists are projecting it will show employers added 650,000 jobs in May.

While an improved jobs market suggests the economy is gaining momentum after the pandemic, investors are keeping a close eye out for signs of inflation.

“If we were to see robust improvement in the labor market tonight, it may suggest a shorter timeline for recovery back to its maximum unemployment rate and that may stoke tapering fears once again,” Jun Rong Yeap of IG said in a commentary.

The benchmark S&P 500 index dropped 0.4% on Thursday to 4,192.85. It was dragged lower by technology companies, whose pricey valuations make them more sensitive to inflation fears, and is on track for a 0.3% weekly loss..

Rising inflation is expected as the economy recovers from the pandemic’s impact, but the key question for many on Wall Street is whether it will be temporary or more permanent.

That likely would prompt central banks to raise interest rates, drawing investors away from stocks into higher-yielding alternatives.

In energy trading, benchmark U.S. crude rose 32 cents to $69.13 a barrel in electronic trading on the New York Mercantile Exchange. It gave up 2 cents to $68.81 per barrel on Thursday. Brent crude, the international standard, added 27 cents to $71.58 a barrel.