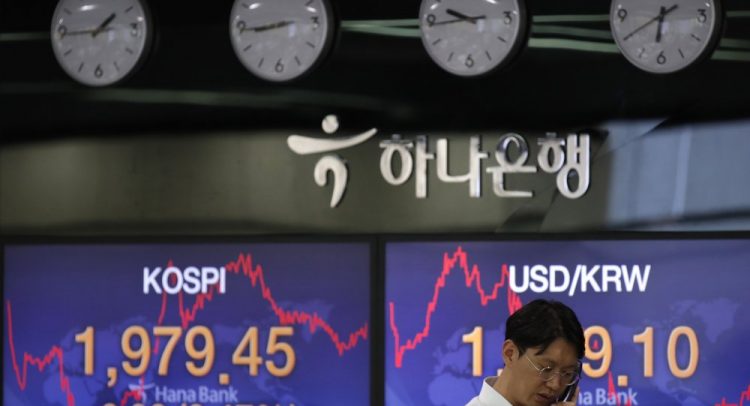 TOKYO (AP) — Global shares rose Monday, with Europe tracking gains in Asia despite news that the German economy fell into recession in the first quarter of the year amid the coronavirus pandemic.

Germany joined other major economies in logging its worst downturn since the global financial crisis more than a decade ago, as exports and consumer spending took a hit from shutdowns and other disruptions resulting from the pandemic.

Its economy contracted 2.2% in January-March from a year earlier, the Federal Statistical Office said. It said investments in the engineering sector, construction and public spending helped to prevent an even bigger downturn.

Since Germany’s economy dipped 0.1% in the last quarter of 2019, the country has entered what is known as a “technical recession.”

The mood was upbeat, also, in Asia, where Japan’s benchmark Nikkei 225 added 1.7% to finish at 20,741.65 ahead of Prime Minister Shinzo Abe’s announcement that the state of emergency that still was in effect for Tokyo and several other areas was ending as outbreaks appeared to be subsiding.

“We have drawn the attention of the world,” Abe said. “We will take a strong step forward.”

Shares in Hong Kong fell initially after police used tear gas to quell weekend protests over a proposed national security bill for the former British colony. By the end of the day, but recouped earlier losses to be little changed. Hong Kong’s Hang Seng inched up less than 0.1% to 22,952.24. The Shanghai Composite picked up 0.2% to 2,817.97.

The protests in Hong Kong in response to legislation presented to China’s National People’s Congress, which is now meeting in Beijing, were the largest in months despite bans on large gathering meant to prevent spreading the coronavirus.

The revival of sometimes violent pro-democracy protests that rocked the city for much of 2019 raises the likelihood of more tensions between Beijing and Washington over China’s efforts to exert more control over the semi-autonomous territory.

“With more riots in the street amid the knockdown effects of COVID-19 and a possible exodus of jobs from the city’s financial center, surely things will get much worse before better,” Stephen Innes of AxiCorp said in a commentary.

Photo: A currency trader talks on the phone near the screens showing the Korea Composite Stock Price Index (KOSPI), left, and the foreign exchange rate between U.S. dollar and South Korean won at the foreign exchange dealing room in Seoul, South Korea, Monday, May 25, 2020. Asian shares are mostly higher, with Tokyo stocks gaining on expectations that a pandemic state of emergency will be lifted for all of Japan. But shares fell in Hong Kong on Monday after police used tear gas to quell weekend protests over a proposed national security bill for the former British colony. (AP Photo/Lee Jin-man)

Report: Brazil's indigenous people are dying at an alarming rate from Covid-19