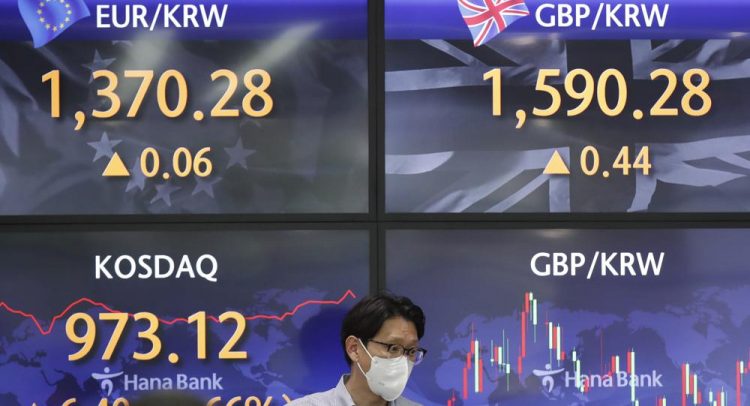 Wall Street futures fell after the S&P 500 index gained Friday, rebounding from heavy selling earlier, but finished the week down 1.4% for its biggest weekly loss in three months.

Thailand reported 9,635 new coronavirus cases. That added to concern after Taiwan and Singapore announced limits on public gatherings and other curbs over the weekend following new infections. The rebound in economies that appeared to have the disease under control fueled concern the region’s recovery might be pushed back.

“The buy everything exuberance that rounded out the week in New York had not translated into Asian markets,” said Jeffrey Halley of Oanda in a report. “Instead, it is surging cases of Covid-19 across Asia that have grabbed the headlines.”

Investors also looked ahead to Tuesday’s release of notes from the latest U.S. Federal Reserve meeting.

On Wall Street, futures for the S&P 500 and the Dow Jones Industrial Average were off 0.2%.

That followed three days of heavy selling driven by investor worries about a possible rise in U.S. inflation. The major indexes had hit all-time highs the previous week.

Taiwan’s 333 new virus cases and Singapore’s 21 were modest compared with India’s thousands. But they come after Malaysia, Thailand and the Philippines re-imposed curbs in response to rising case numbers.

“You don’t have much time to nip this in the bud before you could be dealing with an India-like situation,” said Robert Carnell of ING in a report. The economic impact “will depend in large part on how successful the measures now being rolled out end up being.”