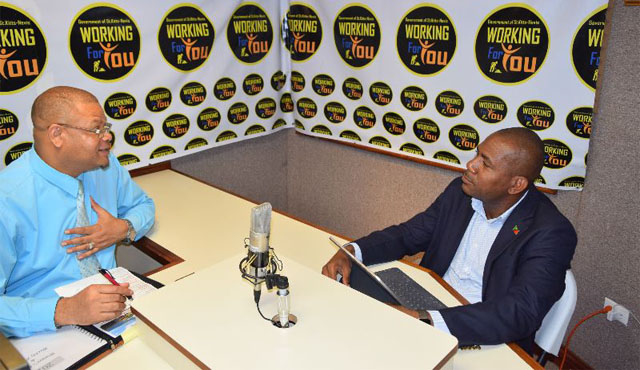 Basseterre, St. Kitts, September 10, 2019 (SKNIS): As work continues to improve the environmental conditions at the Cayon High School, the Ministry of Education says it is going the extra mile to ensure that conditions at the school are conducive for the health of both faculty, staff and students before a date can be arrived at for the school’s re-opening.

Minister of Education and Deputy Prime Minister of St. Kitts and Nevis, the Honourable Shawn Richards, highlighted this during the radio and television show “Working for You” on September 04.

The Government, in its efforts to sanitize the school, has decided to go the extra mile and address the grievances raised by the staff of the Cayon High School.

Honourable Richards said the school was fumigated during the month of August and that they began the process by “cleaning the labs which were at that time identified as having excessive levels of mold.”

He stated that this was done because “the staff has said for example that they have concerns about the entire school, and so, even after those set of tests were done, we took a decision that we were going to test every single area at the Cayon High School.”

The deputy prime minister spoke about the complaints by the staff of bats in a particular roof, saying that the Government of St. Kitts and Nevis engaged with the Public Works Department to remedy that particular problem.

Honourable Richards stated that not only did they fumigate the entire school and dealt with the bat problem, but they also cleaned the entire school to improve the work environment of the Cayon High School staff and students.

The honourable minister said that he cannot confirm a date when the students or staff can return to the school because work is still ongoing at this particular time and that the government of St. Kitts and Nevis, “wants to ensure that when the students and faculty return to Cayon High School, that the school has been deemed safe.”

Hundreds of Nigerians repatriated from South Africa after attacks