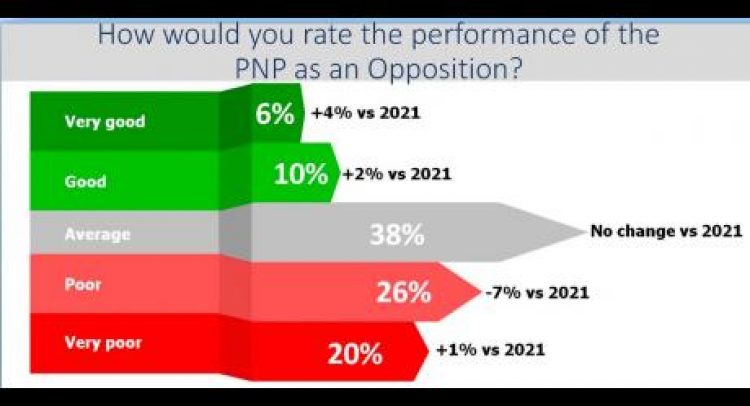 Mark Golding and the People’s National Party (PNP) have registered improved figures in their positive performance ratings, a year after poll numbers spelt trouble for the opposition party bedevilled by infighting and resignations.

The opposition leader’s positive performance rating improved by seven percentage points over 2021, moving from 11 per cent then to 18 per cent this year.

At the same time, his negative rating decreased by eight percentage points to 39 from a high of 47 per cent last year.

However, Golding’s 39 per cent ranking as poor or very poor is almost 50 per cent higher than Prime Minister (PM) Andrew Holness’ negative cumulative rating of 27 per cent.

And in the context of Holness’ 38 per cent performance rating as good or very good, Golding still has much ground to cover in the leadership contest with a positive ranking less than half the prime minister’s score.

The results are the findings of an RJRGLEANER Group-commissioned Don Anderson poll conducted between July 16 and July 25 among 1,113 Jamaicans of voting age.

The poll has a sampling error of plus or minus three per cent.

“In general, you would want to say that when you look at the overall performance of the leader of the Opposition, that it seems to have moved in a positive direction,” Anderson said in a Gleaner interview on Monday.

Seven per cent of participants rated the performance of Golding, who became president of the party in November 2020, as very good, a five-percentage-point increase over his 2021 rating.

Eleven per cent said that the PNP president’s performance was good, translating to a two-percentage-point increase over 2021.

There was also a two-percentage-point increase in the figure for participants who rated his performance as average to 43 per cent.

Golding’s poor rating as opposition leader decreased by 10 percentage points since last year, with 21 per cent of those surveyed still not impressed by his leadership.

Eighteen per cent of those polled rated his performance as very poor. This represents an increase of two percentage points over 2021’s figure.

“You could see on both sides a seven-percentage-point increase in the positives and an eight-percentage-point decrease in the negatives. So in general, you would want to conclude that this was an improvement in the rating of the performance of the leader of the Opposition, 2021 compared to 2022,” said Anderson.

Anderson noted that there was a similar pattern with the results for the opposition party.

In 2021, two per cent of the 1,003 Jamaicans polled between August 19 and September 3 had indicated that the party was performing very good; eight per cent said good; the same 38 per cent ranked its performance as average; 33 per cent had rated it as poor; and 19 per cent very poor.

On Monday, Golding told The Gleaner that he was “pleased” with the improvement in ratings.

“These improvements reflect the hard work put in over the past year, and the party coming together as a solid team working together to deliver a progressive programme for the benefit of the Jamaican people.

“As we hone our message and refine our policy platform, I am confident that these results will continue to improve,” he said.

Despite this, the governing Jamaica Labour Party continues to outperform the PNP in ratings.

The remaining 30 per cent assessed the Government’s performance as below average, with 16 per cent giving it a poor rating and 14 per cent saying it was very poor.

“It is difficult to say what the average mark means, so I won’t make much of it,” said Dr Maziki Thame, senior lecturer at the Institute for Gender and Development Studies at The University of the West Indies, Mona, told The Gleaner on Monday.

“It could indicate apathy, but we would need to know more of what the pollster asked. The only clear indication is that the PNP’s and Golding’s credibility is on the rise and that of the JLP and Holness is declining,” she added.

Maxine Henry-Wilson, chairman of the PNP Unity Committee, said while the ratings have improved for both leader and party, “it is not a case of packing up your marbles and going home”.

She said that Golding has been out in the field and that constituency conferences have seen a swell in attendance and support over the past few months.

“It’s very significant that fewer people view his leadership as poor because they are getting to know him and so they are seeing his strength not only as an advocate but also his strength as a leader,” she said.

“The fact that the internal quarrels are under greater control, there is more a sense of let’s get on with this job. The party is behind him (ratings), which is not a bad thing, because you would have had persons who are not necessarily diehard who would have reflected that they are now feeling a greater level of comfort. The party now needs to do some more work,” she added.

<strong>Review of child protection and juvenile justice system gets underway in St. Kitts and Nevis</strong>