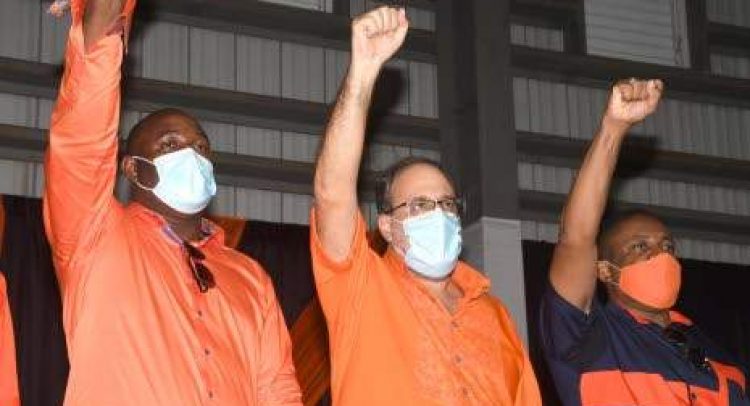 Golding warns PNP on corruption and challenge to his authority

Mark Golding yesterday sought to stamp his authority as president on the People’s National Party (PNP), telling its National Executive Council (NEC) that the Opposition party would offer no haven to corrupt individuals and warned anyone who would want to challenge him for leadership that the only place to do so is at the movement’s annual conference.

“As your party leader I will have no tolerance for corruption; it is a cancer that will only damage our credibility to the Jamaican people. We must make the right choices to give our party the best chance of wining the next elections,” said Golding, who was elected PNP president on November 7, filling the vacancy created by the resignation of Dr Peter Phillips.

In his address to the NEC before it elected a new chairman and general secretary for the party at Jamaica College in St Andrew, Golding — who last year backed then Manchester Central Member of Parliament Peter Bunting’s failed bid to unseat Dr Phillips — said, “Don’t take my sweetness for weakness; weakness has no argument or place… If anybody wants to challenge my authority as party leader, that’s fine, and the place to do that is at a party conference.”

His warning elicited shouts of “Hear, hear!” and “One leader!”

Added Golding: “I will do whatever it takes to deliver on the mandate given to me by the delegates when they elected me as leader. So colleagues, we are going with Golding, mark my words.”

Golding further emphasised that he did not seek the post of party president because of any hidden ambitions he harboured, but rather because he felt “a sense of duty” to do so.

In his earlier comments, Golding paid homage to Dr Phillips and others before him. In going on to note the party’s crushing 14-49-seat defeat to the Jamaica Labour Party in the September 3 General Election, he reiterated that it was full time the party addressed the fractious internal issues which contributed to that loss.

Golding further called for party members to display respect in how they address each other, noting that vitriolic remarks spattered on social media do not send the right message.

In the meantime, he pledged that the $15-million fund he had promised to establish for party workers will be launched in December to shouts of “Hear, hear!”

Yesterday’s vote ended with former vice-president of the party and Member of Parliament for Kingston Eastern and Port Royal Phillip Paulwell being elected chairman, while Dr Dayton Campbell won the bid to replace Julian Robinson as the party’s general secretary.

Paulwell was up against Angela Brown Burke for the post and emerged with 153 votes to Brown Burke’s 133. Meanwhile, Dr Campbell received 148 votes to contender Raymond Pryce’s 139 votes.

A total 288 of the just over 300 delegates turned out and voted in the election.

Paulwell, basking in his victory, told the Comrades he had no hidden hand.

Dr Campbell took the podium amidst boisterous shouts of “recount, recount” from individuals on the outside aligned to Paulwell’s camp.

The characteristically feisty Campbell, in a demure speech, said: “We have work to do…We need to ensure there is mentorship in place…Let us get to work.”