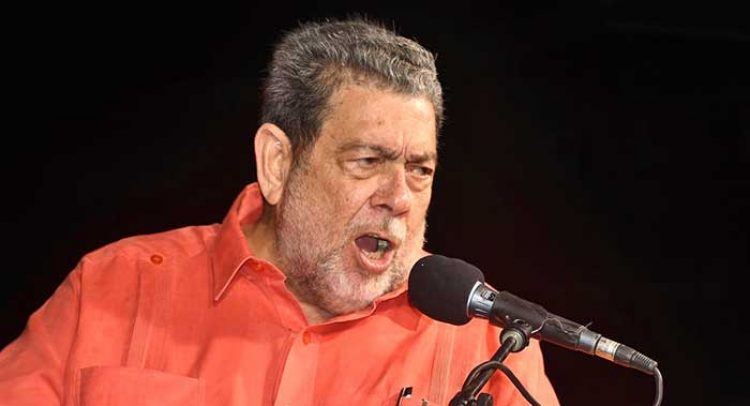 One week after saying if any of the opposition’s election campaign strategists come to St. Vincent and the Grenadines (SVG) they will not leave, Prime Minister Ralph Gonsalves says two such strategists are in the country directing a social media campaign.

He also said that these strategists are involved in the tapping of telephones — an illegal activity in SVG — but did not say what he, as Minister of National Security, or his government, is doing about it.

On Saturday, Gonsalves told supporters of his Unity Labour Party (ULP) at a rally in Biabou that the NDP is “trying all their best to fight this election on social media”.

He said that “the people who want to buy our passports and sell our passports” (citizenship by investment — CBI) are bankrolling the main opposition New Democratic Party’s (NDP) election campaign.

“They have three of them in England and two down here directing their social media campaign. And what they are doing, at the moment, when you go on the internet, they are using the internet to see what you like to look at, what are your concerns, and trying to send targeted messages to you to see if they could kerfuffle your mind.

“What they are trying to do is to do exactly what Donald Trump hired the same people to do in America. You hear me? But the point is this, we have a consciousness in St. Vincent and the Grenadines, we have an understanding of politics that these foreign marauders don’t have any grasp of our culture and how we respond to things.”

This is the process that results in, for instance, advertising about a particular mobile device appearing on one’s Internet platforms after searching the internet for that device or a similar device.

It is the same process that results in internet users in SVG seeing ULP and NDP advertisement on various internet platforms, including Google and social media.

But Gonsalves added a more sinister twist to what many internet users have accepted as the price for their “free” usage of many internet platforms – accepting that they could become the subject of targeted or random advertising.

“That is what they are doing but all we have to do as children of our Caribbean civilisations, as Vincentians with a level of consciousness, is to steady our minds as Vincentians and particularly those who are interested in defending our independence and our sovereignty, which means something to us as a people, tied up with our development, if you have that consciousness, they could never break the wall in your mind, and that’s why we say five in a row.”

Gonsalves said a company in Switzerland and one in Hong Kong, controlled by Europeans, British and Chinese are giving the NDP strategists, the money to run the campaign.

“All these posters and all of these ads are paid for by people who want to sell your passports and bring a lot of vagabonds in this country,” Gonsalves said, without giving any indication of who pays for the same paraphernalia on behalf of his party.

“Let me tell you what will happen. If they (NDP) get in, people who don’t belong to St. Vincent, they are going to buy a passport and become a citizen and buy your citizenship, which means that they could buy up land as much as they want in St. Vincent and the Grenadines, as they are doing in the other islands and other countries where you have selling of citizenship and passport,” he said.

In the 2015, Gonsalves also used a similar land grab argument when the opposition proposed to declare all Garifuna as honorary citizenship, recognising them as descendants of indigenous Vincentians who regard the country as their ancestral home. The declaration would have been void of the rights and privileges of legal citizenship.

“And when the Chinese comes, they don’t just come so you know; they bring their own workers you know and they mark off a place and you can’t go inside ah it, you know.”

He said that the NDP is seeking to re-colonise SVG .

“We fought for our independence, we got it. We are a proud and independent people. We are a member of the Security Council of the United Nations because of our independence and our sovereignty. They want to allow our country to be re-colonised, to our disadvantage.”

The prime minister said he want the youth, especially to understand this, adding that in the normal course of things, the youth will be attending his funeral.

“But, if you all who will have to bear the burden of having other people own your country, own your citizenship, recolonise St. Vincent.  They might want you change your language to Chinese, I don’t know, but that is what is going to happen in St. Vincent and the Grenadines if you allow that sort of affairs to continue.

In 2015, the ULP was surgical in its use of social media to reach young, more tech-savvy voters, but the NDP has caught up and this year seems to be outstripping and outspending the ULP in this regard.

Gonsalves said that the NDP is trying its best to fight the election through social media.

He said that disgruntled ULP supporters have hearkened to his advice to forget their grievances until the polls to “deal with our political enemy, which is the enemy for Nov. 5”.