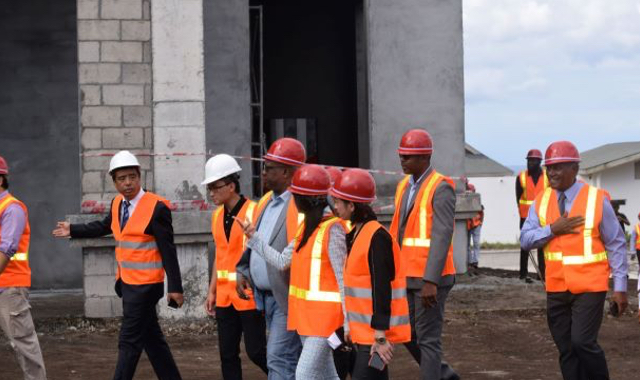 Basseterre, St. Kitts, 18th January, 2019 (MyVueNews.com) – Construction work on the previously stalled St. Kitts Ramada Resort is moving into final stages, with an expected opening in the last quarter of 2019.

Speaking to C.G.R.E.C. CEO Ms. Ying Jin, Attorney General Vincent Byron said, “We are happy that you have involved in your labour force many of our citizens. I see them from all over, from Newtown, Sandy Point, St. Paul’s and there are a number of locals who were already employed, and we are heartened to understand that once this project is opened you will have more than 300 locals employed in the ongoing operations of the hotel.”

Prime Minister Dr. Timothy Harris told the developers that they have the full support of his Government.

He said, “We have seen progress here. This is my second site visit…and I am satisfied that the project is advancing apace and the project deserves the continuing support of the Government of St. Kitts and Nevis.”

Prime Minister Harris indicated that it was the intervention of his Cabinet after assuming office that revived the stalled project.

“Contracts and commitments were made but nothing more. It was through the hard work of my administration, working in partnership with the developers that allowed them to get from ground zero to where we are today, talking about the imminent opening of a landmark hotel property – an international hotel property in the Ramada Windham brand,” Harris said.

An approved Citizenship by Investment (CBI) project, the St. Kitts Ramada Hotel is located in the Whitegate area of St. Kitts, about 12 miles northwest of Basseterre.

The CEO and Managing Director of the Whitegate Development Corporation, Mr. Ellis Hazel, commented, “It is likely to grow into the largest construction site in the entire Eastern Caribbean in another couple of months with the pursuit of phase two. Phase two of the project would include possibly two other hotel sites, a series of luxury villas, further condo units and would really lead to the true transformation of the Whitegate area.”