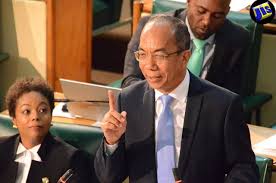 GOVERNMENT and Opposition leaders, who met at the University of the West Indies (UWI) Regional Office, Mona, yesterday for the resumption of the so-called Vale Royal talks, are to consider expanding the forum to include leaders of other sectors.

In a joint release following yesterday’s resumption of the talks, which were first held more than a decade ago to accommodate discussions between the Government and the Opposition on issues of national significance, the parties said they had agreed to consider the inclusion of the other sectors.

According to the joint release, which was issued by Dr Horace Chang, general secretary of the ruling Jamaica Labour Party (JLP), “there was a decision to consider the inclusion of private sector, church and civil society groups, periodically, to participate in the dialogue on crime, violence and public order”.

It was agreed that several draft policies and bills would be shared for future discussions, the release added.

Both sides also agreed that the Electoral Commission of Jamaica (ECJ) would provide a plan, within a month, “on how to ensure the maintenance of clean voters’ lists”. This was obviously influenced by the failure of successive administrations to finance a proper voter reverification which is legally required.

Main items on the agenda yesterday were discussions on: crime and national security; parliamentary procedures and committees; and the reverification of the voters’ list

The release said that “the leaders held frank and in-depth discussions on national security, crime, violence and public safety, as well as discussions on important legislation proposed by the Government”.

It said that “both leaders spoke of the importance of ensuring the positive framework established through the Vale Royal Talks is preserved and encouraged”.

Prime Minister Holness had announced in early December last year, during his apology on behalf of the Government for the consequences of the May 2010 West Kingston operation, that his Government intended to resume the talks which began in 2006 under the P J Patterson Administration and focused on crime and violence.

However, after the Government missed its January deadline for the talks to commence, Dr Phillips made a number of requests for it to commence urgently, in light of the serious crime and violence situation.

Holness said yesterday that there could be a change to the name of the discussions, as the earlier talks were named after the Vale Royal venue, which was originally the official home of Jamaica’s minister of finance. However, there was no suggestion from yesterday’s meeting that such a change would be made.

The prime minister said that the formula would provide the framework for the two major political parties — the governing Jamaica Labour Party and the Opposition People’s National Party (PNP) — to start conversations “particularly to address the issue of garrisonisation”, which is about inner-city communities made up largely of supporters of one party.

Barbados repeat as Under-15 champions