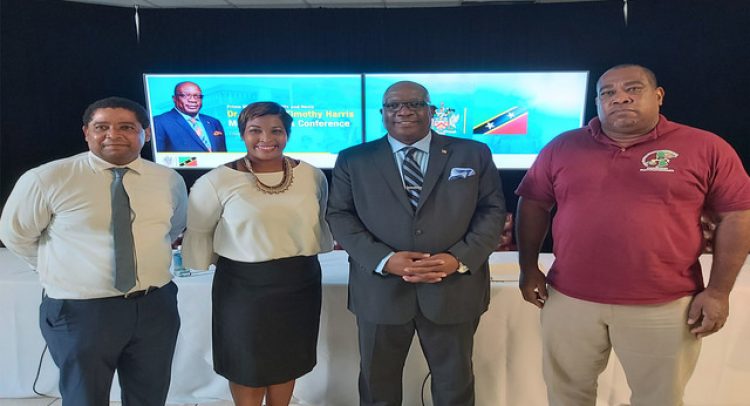 Government committed to the regularisation of STEP workers

BASSETERRE, ST. KITTS, July 14, 2021 (S.T.E.P.) — Commitment made by the Team Unity Government on the regularisation of the Skills Training Empowerment Programme (STEP) workers that would entail change of their status to Government Auxiliary Employees (GAEs) is still on the front burner and any delay is not a cancellation but rather a postponement of the commitment.

Prime Minister and Minister of Human Resource Management, Dr the Hon Timothy Harris, who has responsibility for the Skills Training Empowerment Programme (STEP) made the observation on Tuesday evening, July 13, on the latest edition of the popular Leadership Matters, a virtual forum series, on ZIZ Television, held under the theme ‘Building a resilient road to recovery’.

Responding to a question posed by a caller to the programme, which was moderated by Ms Jacqueline Bryan, the Honourable Prime Minister explained that with all the shutdowns and the delays and the refocusing of actions and efforts of the government in the fight against the Covid-19, government has had to delay that particular action for a later date.

A committee, the STEP Regularisation and Pensions Reform Committee, which is headed by the Accountant General Mr Levi Bradshaw, has done substantial work and its members are now at a position where they would make a final presentation to the Cabinet.

“What we have had is not a cancellation of the commitment but a postponement of it, having regard to the focus attention being paid now to the management of Covid-19,” said Prime Minister Harris.

Viewers and listeners to the Leadership Matters Programme were reminded by the Prime Minister that the Team Unity Government has been committed to the entire establishment of the government. He noted that he had announced on Thursday last week at the Prime Minister’s Monthly Press Conference that so far the government has expended over $160-plus million in wages, in salaries, and in pension benefits to the STEP workers.

He concluded: “So they (STEP workers) continue to earn, and the government has ensured that notwithstanding the vicissitudes and the hardships, everyone who had been an employee or part of the public sector broadly, including the Skills Training Empowerment Programme (STEP), has been able to earn something that allows them to weather the storm. So that commitment again remains.”

Members of the STEP Regularisation and Pensions Reform Committee, which was put in place to advance government’s policy regarding STEP workers and the Government Auxiliary Workers, were first introduced to the public on Friday July 3 last year by Prime Minister Harris during his first monthly press conference since the June 5, 2020 elections.

US to begin evacuating Afghans who aided American military