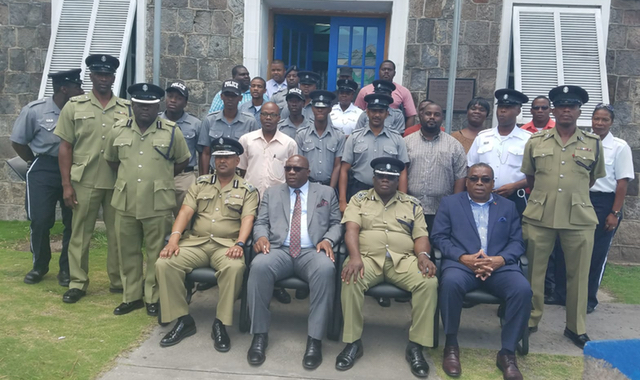 In a meeting held on Wednesday, 23rd May, in Charlestown, the Minister of National Security announced Government’s commitment to increase traveling allowances, increase displacement allowances, give consideration for relocation allowances for recruits from throughout the OECS sub-region and to make land available for OECS nationals on the same terms as nationals of St. Kitts and Nevis, consistent with OECS Treaty obligations.

Also included is support for more advanced training and the resumption of extra duty allowances.

Referring to several significant investment in the Police Force, Harris said, “Where we can do anything that will make life more comfortable, we certainly as a government are motivated to doing so, and we will do so, but we need to ensure that we are getting results for the investments that we are making in law enforcement.”

Prime Minister Harris was accompanied at the meeting by Cabinet colleague Ian Patches Liburd, as well as members of the Police High Command, including Commissioner of Police Ian Queeley and Deputy Commissioner of Police Hilroy Brandy. Also at the meeting was the Head of the Nevis Division of the Royal St. Christopher and Nevis Police Force, Superintendent Trevor Mills.

Photo: Prime Minister Harris with members of the Police High Command and other officers of the Force.