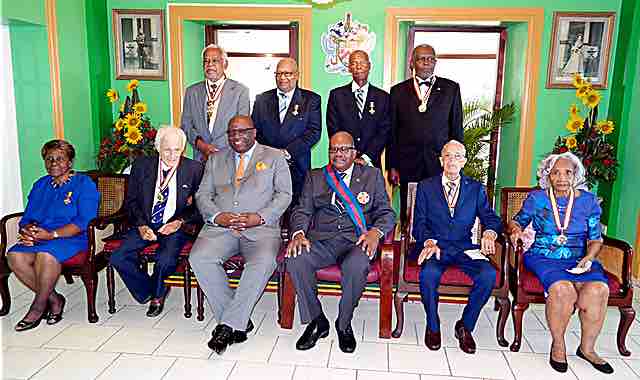 Basseterre, St. Kitts, 21st February, 2018 (MyVueNews.com) – In an Investiture Ceremony held at Government House, Springfield, on 21st February, 2018, eight nationals were presented National Awards having been named during the Independence celebrations of 2017.

St. Kitts & Nevis’ Governor General Sir Tapley Seaton conferred the Companion of The Star of Merit (CSM) and the Medal of Honour to the awardees in recognition of their contribution to the development of the nation.

Commending the recipients of the National Awards, Prime Minister Dr. Timothy Harris said they exemplified a sustained commitment to the development of the country.

Prime Minister Harris stated, “Today’s Investiture is a culmination of your many years of devoted service, outstanding commitment and leadership in your respective areas of service and expertise. In honouring you, we also pay our respects to those who stood with and by you and allowed you the space, time and support to serve our country faithfully and loyally.”

According to the Prime Minister, the awardees had placed the country above self and were shining examples of the remarkable things that could be done by dedicated individuals.

Barbudans To Vote In Antigua