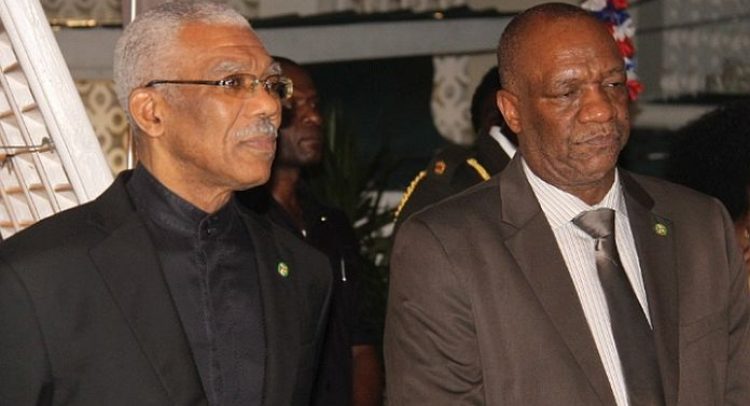 Granger has no intention of conceding defeat – Harmon

In the wake of intense pressure from the international and local community for President David Granger to concede his defeat at the March 2, 2020 polls, sections of his A Partnership for National Unity/Alliance For Change (APNU/AFC) coalition party have signalled a dogged determination not to give up.

In an interview on a radio programme on Sunday, APNU/AFC Campaign Manager and former Director General of the Ministry of the Presidency, Joseph Harmon, who purported to speak on the Head-of-State’s behalf, said that the President has no need to and will not concede to the winner of the elections.

“Concede to what? Concede to whom? What is he to concede to? It appears to me and I would venture to say any right-thinking person, to be a most ridiculous and nonsensical proposition… for the persons who are calling for Granger to concede, that is not going to happen,” Harmon said on the programme.

The National Recount had shown that the People’s Progressive Party (PPP) won 233,336 votes while the APNU/AFC garnered 217,920. But in a report done by Chief Elections Officer (CEO) Keith Lowenfield, it was claimed that the A Partnership for National Unity/Alliance For Change (APNU/AFC) coalition garnered 171,825 votes while the PPP/C gained 166,343 votes.

How the CEO arrived at those figures is unknown, since the certified results from the legally conducted recount exercise supervised by GECOM and a high-level team from the Caribbean Community (Caricom) pellucidly show that the PPP/C won with 233,336 votes while the APNU/AFC garnered 217,920.

When Lowenfield brought his report to GECOM Chair, Retired Justice Claudette Singh, it was reported that she immediately rejected it and told him to prepare the right report as she had instructed him to do, based on the recount numbers. Despite the lack of credibility that was placed in Lowenfield’s report, however, Harmon leaned heavily on the report to support his contention that Granger has no reason to concede.

“In view of a report submitted by the Chief Elections Officer to the Commission, showing that Mr Granger coalition, APNU/AFC, with the majority of the valid votes cast after the recount. So, there you have it, a report showing the valid votes and still, people are calling for Granger to concede,” Harmon, who is widely perceived to be Granger’s right-hand man, said.

Harmon also spoke about the “impatience” of the people and the anxiety surrounding the COVID-19 pandemic and added that “APNU/AFC calls on the public, in Guyana and around the world, to respect the Constitution and laws of Guyana.”

Cracks in the camp
It was only recently that coalition partner Justice For All Party (JFAP) founder CN Sharma, broke away from APNU/AFC’s dogged refusal to accept defeat in the March 2 polls. In a statement, he made it clear that enough was enough and it was time for the country to move on.

He had chastised those bent on dragging out the process and extended congratulations to PPP/C on their win. Sharma had pointed out that the National Recount was carried out and from the votes counted, it is clear the PPP/C is the winner.

As such, he had urged that PPP/C Presidential Candidate, Dr Irfaan Ali be sworn in without delay. Sharma had also called the last 108 days exhausting and said that the people are starving and suffering, due to the COVID-triggered economic slowdown.

Granger’s own son-in-law, former Business Minister Dominic Gaskin, also made a statement on the same day as Sharma, in which he conceded that APNU/AFC lost to the PPP/C and called out his party’s leadership for fooling supporters.

And incumbent Public Security Minister Khemraj Ramjattan was caught on a recording, conceding defeat to his Ministry staff, during a farewell speech he had given. In that speech, Ramjattan had acknowledged the PPP/C winning by some 15,000 votes and had told the gathering he was willing to move on.

A number of persons have been calling on Granger to concede, from political analysts to powerful politicians in Washington. It was only on Friday that Chairman of the United States’ Senate Foreign Relations Subcommittee on Western Hemisphere, Transnational Crime, Civilian Security, Democracy, Human Rights, and Global Women’s Issues, Marco Rubio, wrote a missive urging Granger to concede an elections defeat.
Rubio was joined in his statement by Senators Jim Risch and Bob Menendez, Chairman and ranking member respectively, of the Senate Committee on Foreign Relations; as well as Ben Cardin, in encouraging Guyanese authorities “to begin a democratic transition of power that reflects the results of the March 2nd General and Regional Elections”.