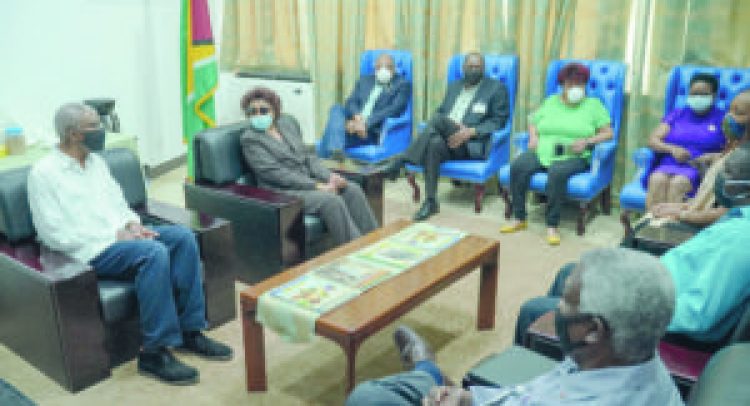 Granger promises to accept ‘whatever’ declaration is made by GECOM

In what is his first public appearance in several weeks, President David Granger on Sunday toured the Arthur Chung Conference Centre where the national recount is ongoing and reiterated his commitment to accepting whatever declaration is made by the Guyana Elections Commission (GECOM).

“Whatever declaration is made by the Chairman of the Elections Commission would be regarded as legitimate by the coalition Government,” he told the media in a brief engagement.

His announcement came days after Attorney General, Basil Williams told the media that any results coming out of the recount would be illegal. He said that

the Laws of Guyana do not “cater for a National Recount”.
Williams contended that the 10 declarations, including the contentious declaration made by embattled Returning Officer Clairmont Mingo for District Four (Demerara-Mahaica), are “valid and subsisting and under our law, the only way they could be rendered nugatory is by a decision of an election petition and so it comes to the other status, question and purpose of the National Recount.”

However, when asked about this position taken by one of his senior legal advisors, the caretaker President maintained his position and dismissed the one adopted by Williams.

Further asked whether there will be any legal challenges by his party, the APNU/AFC coalition, to the National Recount and its outcomes, the caretaker Head of State iterated that “whatever declaration comes out of the Chairman of the Elections Commission would be regarded as legitimate and in accordance with the Constitution of Guyana.

Meanwhile, with the denial of The Carter Center hanging over his head like a cloud, the President sought to defend their exclusion by touting the presence of Caricom during the interview with the media.

“I’m very confident in Caricom’s ability and integrity. And I’d just like to repeat what the Ambassador of Barbados to Washington said, that Caricom is the most legitimate interlocutor in the Guyana situation,” he said.

“I’m inspired by that remark and I share the sentiment that Caricom is the most legitimate interlocutor on the Guyana situation. Caricom was here before and is a reliable partner in Guyana’s development.”

A letter addressing the issue of The Carter Center first surfaced last Monday, written on Granger’s behalf by caretaker Foreign Affairs Minister, Dr Karen Cummings. In the letter, to United States (US) Ambassador Sarah Ann Lynch, The Carter Center was not only denied permission but the US was also told to respect the closure of Guyana’s airspace due to COVID.

After a week of criticisms and interventions from US Senators and Congressmen, Granger again shut the door on The Carter Center on Friday, with another letter reiterating the Government’s position.

Meanwhile, Granger also spoke about “changes” that have to be made to the electoral system, so that Guyanese will not have to wait so long for results to be declared. Asked if the elections were credible, Granger instead pronounced them as well managed and orderly. According to him, the question of whether the results are credible is another matter.

“It’s too long and I believe that given the circumstances, the measures put in place will bring the process to a satisfactory conclusion,” he said.